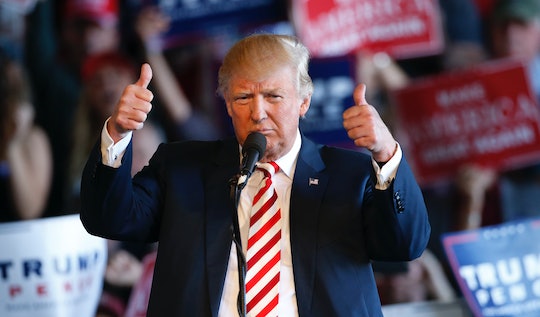 The Funniest Final Presidential Debate Tweets Say What Everyone Is Thinking

The final presidential debate is the two major party candidates, Hillary Clinton and Donald Trump's last chance to win over whatever undecided voters are still left out there. For those of us who already made our decision sometime last year, it's our chance to laugh at all of the pithy witticisms brought to us by the geniuses on Twitter. The funniest final presidential debate tweets say what everyone is thinking, and are possibly the most entertaining part of the whole production (sorry, Ken Bone).

The candidates themselves love to create "off the cuff" remarks to be hopefully hashtagged and retweeted until Election Day on November 8. Think "Trump'd up trickle down economics," and "You'd be in jail." However memorable these remarks may be, they are not nearly as entertaining as some of the hilarious tweets posted about them. This debate was no different, and Twitter had an absolute field day mocking everything from Trump's sniffles to Clinton's waves. Because I care about the American electorate, I've rounded up some of my favorites, which will either help you to form your decision this season, or, more likely, reaffirm the decision you've already made. So without further ado, here they are. You're welcome, America.

Some viewers took a humorous view of Trump's chosen epithet for Clinton, which is of course "Crooked Hillary."

That is including the moderators, by the way. And probably everyone in the audience.

At the very least, everyone could agree that the night was going to be a long one.

And that Clinton was looking her Shondaland best.

Others made some very astute observations.

And then the Queen of Everything said:

As exhausting as this election season has been, at the very least we've gotten some very excellent jokes out of it. Whether you're planning your move to Canada or simply laughing to keep from crying, we can take comfort in the fact that the rest of the nation is laugh-crying just as hard. It's been rough on all of us, but the end is nigh, folks. So we might as well laugh about it while we still can.