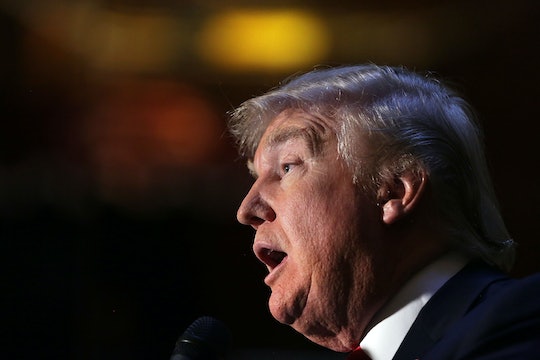 The Internet is at its finest during the presidential debates, using social media to make following this election cycle even more entertaining. So when you have a group of Republican party nominees battling it out at the Miluwakee Theatre and people who have their finger on the screencap button and Photoshop on deck, you're bound to get some funny GOP debate memes. Though some are hard at work live-tweeting, others are fervently crafting up A+ memes that we'll be sure to use for years to come. (OK, they're probably only be relevant for a few weeks, but whatever, they're still awesome.) And for those of us who need a laugh, like some levity with their politics, or are in desperate need of the perfect reaction GIF to capture our feelings, we're so grateful.

And if you don't remember the memes that came from the CNBC debate, let's take a walk down memory lane shall we? It may seem like the Oct. 28 debate was ages ago, but this event had so much to go off on. And — as always — the Internet took note. I mean, Republican hopefuls offered us warm kisses, tequila, and Colorado brownies (none of which we ever asked them for). So, the generous Internet gave them — and the world — top-notch memes in return. You're welcome, GOP.

But if you thought the memes would slow down by the Fox Business News/Wall Street Journal debate, rest assured they have delievered. At some points, it seemed like they were churning the out before they happened. Here are some of the best memes that took on tonight's #GOPDebate.

The Candidates On Obama