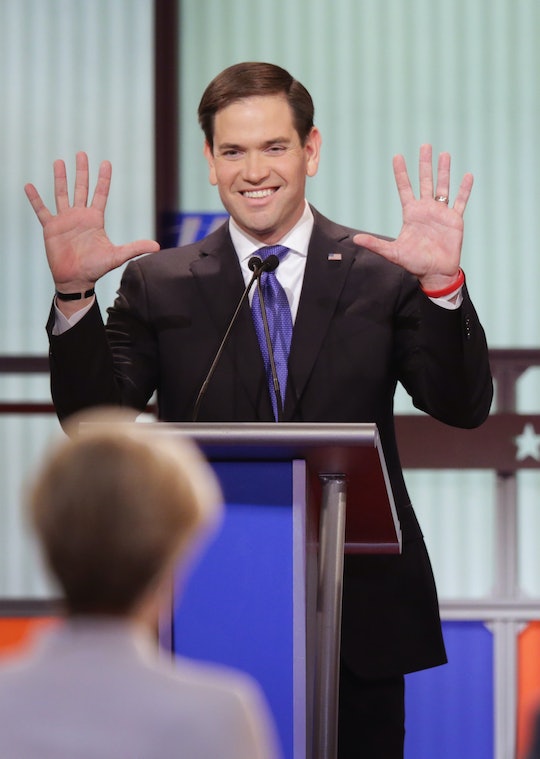 Thursday night's Republican debate in Detroit, Michigan had pretty much everyone who was tuned in wondering..."Is this real life right now?" The atmosphere was anything but presidential, and seriously gave me flashbacks to my old high school debate days. Of course, as always, the best part of the evening was the hilarious GOP debate tweets that gave voters a reason to laugh through the tears.

From Marco Rubio defending bully Donald Trump to Trump apologizing for his rudeness, and talking up his junk (seriously), it was hard to believe some of the things that went down on that stage. So many moments had me scratching my head that I ended the night sporting a Trump 'do. Really with the Hillary Clinton bashing? Talking about your size?

"He hit my hands. Nobody has ever hit my hands," Trump bewilderingly remarked early in the night, referring to Rubio's insults against his "small" hands. "[He insinuated that] something else must be small. ... I guarantee you there’s no problem." Yikes.

While some people are freaking the eff out over this entire situation show-down, the majority seemingly found the whole thing humorous. Twitter was on point during the debate, of course, actually making us literally LOL more than the candidates themselves.

Just in case those social media messages weren't enough and you want to tune into the debate itself, you can watch the entire thing on the Fox News livestream. You have been warned.