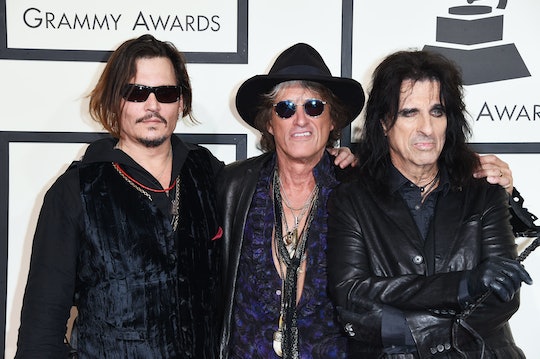 There were a lot of really great moments at this year's Grammys. And then there was Hollywood Vampire's performance. Although their intentions were good, the funniest tweets about Hollywood Vampire's tribute for Ian Fraser Kilmister are just ... well, they're perfect. If you're more of a Justin Bieber, Taylor Swift kind of music fan, we can back up: Kilmister, known to everyone as Lemmy, headed up Motorhead, one of the most influential heavy metal (speed metal? Let's not get into this now) bands ever. He passed away in December, and the tribute to Motorhead done by none other than Alice Cooper, Joe Perry, and Johnny Depp (yes, really) was pretty badass. Sort of.

What everyone will remember, however, is the David Bowie tribute from Lady Gaga, even though Hastings was a star. Or as presenter Dave Grohl, of the Foo Fighters put it, he was rock and roll. Having gone through a metal phase myself, I can attest to this. But there's no way any fan of music can defend what happened onstage when Hollywood Vampire took the stage. There are a few reasons for this: they were all over the place. Also, Alice Cooper looks exactly the same as he always has, yet somehow, really old. The only really interesting thing is seeing dreamboat Johnny Depp get down on the guitar, but even that felt like watching your dad try to "rock out" with his college buddies. It's just uncomfortable for everyone.

First, It Was Depp Who Started Things Off:

Plenty Of People Made Comments About Alice Cooper

Then again, what do you expect from a band named after Cooper's old celebrity drinking club," where the price of admission was just outdrinking everyone else"? Lemmy would have been proud of the performance. But we should all be spared Depp on the guitar next year. (Now, another Johnny Depp movie? I'm all ears.)