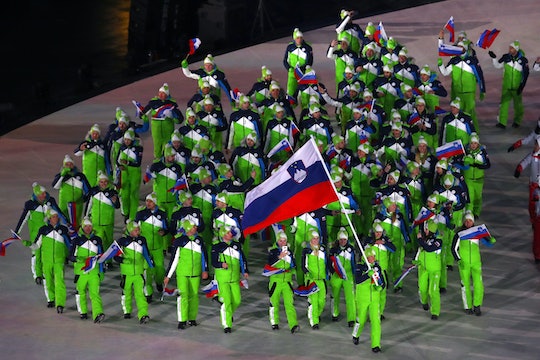 Like athletes at any sporting event, Olympic competitors are no strangers to play-by-play commentary about their performance, including hits, misses, and oh-so-close(s). But one thing that is unique to the games is the opening ceremony, which comes complete with performances and celebrations unique to each country, including costumes and attire that receive feedback akin to that of the red carpet. The standout this year was Slovenia, who dressed in lime green snow suits that garnered some pretty clever reactions. If you're curious about some of the funniest tweets about Slovenia's opening ceremony outfits, well, look no further.

At least, that was the thought behind some of the most amusing tweets. User Miche tweeted: "Here's Slovenia to blind us all, rocking neon green. Love a country who just through out the flag and are like, aye, our colours are neon green #Olympics2018#OpeningCeremony."

Some, like one from Gillian, were a bit more straightforward: "GREEN!!! My eyes! Oh Slovenia... #winterolympics#OpeningCeremony."

Of course, she's not totally off. After all, have you ever been driving after snow has fallen and caught a bounce of light from the sun to the snow to your eyeball? Yeah, the lime green attire choice kind of had people feeling like that. Well, at least that was the sentiment behind Evan's tweet, which was just a simple, "Worst outfit goes to Lime Green Slovenia! #OpeningCeremony."

Some people, of course, drifted toward a drier sense of humor, like BBC Sport who may or may not have meant to provide commentary on Slovenia's outfits, but people took their "vivid" tweet that way. User Joanne even commented, "Could have been worse, do you remember the German outfits from Sochi?"

OK, yes, that's a good one, especially when you consider that the Kermit reference is pretty much dead on. I mean, those lime green snow suits kind of had everyone thinking, "It's not easy being green," am I right?

My personal favorite came from Tied To The Bells who went straight for the dad joke that would be a surefire hit at a barbecue or around-the-water-cooler chat in the office. "Slovenia is lookin a lil green #OpeningCeremony#Pyeonchang2018," they tweeted with accompanying winking-face-tongue-out emojis. That one had me cracking up way more than I care to admit.

I am also a little obsessed with Jana, who called out everyone with her take-no-bullsh*t tweet. "Slovenia's clothes are literally the same colours every year, can't believe people are still surprised #OpeningCeremony," she tweeted. Because Jana's all, "Yawn, can we please move on, people?"

And she's not wrong. Slovenia's Sochi outfits even included a touch of bright blue. I will say, however, that the bold colors were used a bit more as accent colors, as opposed to the PyeongChang all-out design choice.

But there were also some enthusiastic responses to Slovenia's outfit choice. Some people welcomed the splash of color in the midst of a sea of more conservative choices. Devin and Eli both gave a thumbs up to the getups. Brooke even tweeted: "Woot! #Slovenia rockin’ the bright green! #PyeongChang2018#openingceremony."

Other people didn't necessarily green light (see what I did there?) the outfits, but, either way, they sent out tweets of mad respect for the athletes. "Slovenia went for the neon and I respect that. #Olympics#OpeningCeremony," one user tweeted.

Which was kind of what user Super-F intended with her inquisitive tweet about the attire: "Are Slovenia traditionally green or? #Olympic." To which people responded with comments that sounded a lot like shrugged shoulders, so Super-F decided she would give it an "A" for effort."

Because, really, at the end of the day, it's not about blue, red, yellow, or lime green. It's all about that gold, baby.