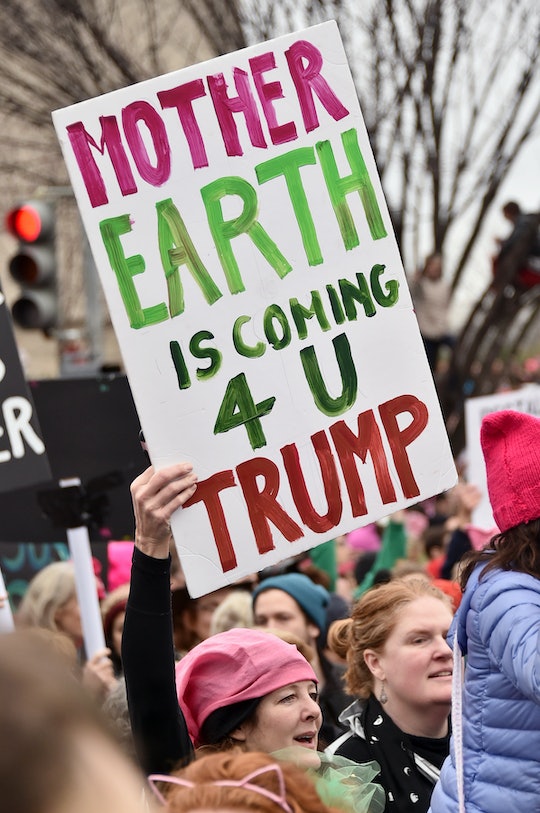 Beginning as a grassroots movement but turning into a worldwide phenomenon, the Women's March on Washington welcomed hundreds of thousands of protestors, all of whom were eager to gather together in opposition to the previous day's events. Clever chants were accompanied by colorful signs, some of which were simple and serious, others of which were a bit more long-winded and involved. The funniest Women's March signs, however, are definitely worth revisiting, and laughing over once more.

Protestors took markers and stickers to poster boards everywhere, as cities all over the world participated in the march, its influence stretching to every continent. It's estimated that nearly half a million protestors came to D.C., all with the common goal of protecting women's health and women's rights, while preaching unity and community to a government that doesn't appear to represent those values at present.

In D.C. and London, in Los Angeles and Berlin, in Sydney and Antarctica, the chants that rang out emphasized a variety of topics, including Trump's absence of the popular vote, a woman's right to choose, the necessity of democracy, and multiple iterations that made plenty of comments on Trump's tiny hands. Signs served as captions to the chanting, elaborating a bit further on shared ideas. Some of the funniest signs riffed on pop culture, made excellent puns, and took sly digs at the newly elected president. See all of the creativity for yourself:

Who would have thought that Prince, Britney Spears, Paul Blart: Mall Cop, Meryl Streep, and Regina George would all be harnessed as political ammunition, mobilizing women's rights? Suffice it to say, the march signs made for some pretty entertaining literature, both in person for participants as well as after-the-fact, forever saved online. Protestors made their points and displayed their wit, proving that an oppressive figure would not break or define their stories, and assuring that they would continue to speak out against such a figure, indefinitely.

The cheeky signs and sweeping protests made it so that Trump's first full day in office was anything but peaceful. Truly, women worldwide utilized humor as a useful, uniting tool. Compulsive tweeter Trump was noticeably silent on Saturday, failing to comment on the day's events at all. His only message of the day was a photo of him surrounded by family and staff, with the caption: "I am honored to serve you, the great American People, as your 45th President of the United States!" Perhaps, for once, Trump's listening before he speaks.