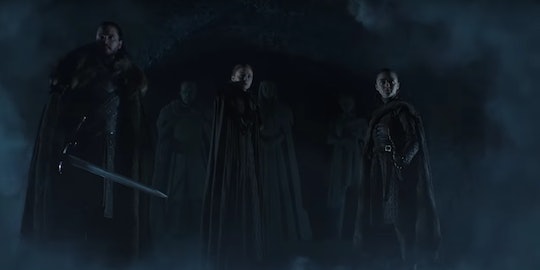 Here's When The Final Season Of 'Game of Thrones' Will Premiere

All good things must come to an end, and the same is true about HBO's hit series Game of Thrones. After capturing — and subsequently ripping apart — heart around the world, the show will come to an end with its eighth season. The Game of Thrones final season premiere date has been announced, meaning that fans won't have to wait much longer for the beginning of the end.

The premiere of the final season premiere of Game of Thrones will air on April 14, 2019, according to the Verge. HBO announced the upcoming debut in the form of a video teaser on Sunday, released shortly before the premiere of True Detective. Few details are known about the show's final season, but if the teaser is any indication, it is going to be epic.

The season will include six episodes total, but don't let that number fool you — a lot of material will be covered. HBO chief Richard Plepler told Variety that the final season “exceeded the bar" set by the first seven seasons and Plepler described the episodes as being more like “six movies.” HBO's teaser for the season shows Sansa Stark, Arya Stark, and Jon Snow in the underground the Stark family's Crypts of Winterfell, and the Starks are looking pretty ominous. Considering the fate of these three central figures was left up in the air at the close of the seventh season, fans will likely be grateful for the apparent focus on the Stark family as the show comes to a close.

The trailer released on Sunday provided the longest preview of the coming season to date — and fans were ready. Less than 24 hours after airing, the YouTube video of the trailer has already racked up more than five million views. A shorter teaser was aired during the Golden Globes, but it left the show's millions of viewers wanting more.

HBO and those responsible for creating such a powerful following are well aware of the high expectations held by fans of the show. One of the directors involved with season eight, David Nutter, told Entertainment Tonight in November that the final season premiere won't disappoint. "It was the first time that I was able to actually direct the premiere episode of the season, so I'm just nervous," he said. "Hopefully, the audience will like it, starting season eight, but I'm very confident that they will." And the rest of the season will be just as satisfying as the premiere, Nutter said:

I know that I can say this: If you're a fan of the show, you will be completely satisfied by where the series goes to. They've really done a tremendous job in servicing the drama and the characters and so forth, and there are many ups and downs and twists and turns all across the Game of Thrones society and the world they are.

Those super-fans disheartened by the news of their favorite coming to an end can take comfort in the fact that HBO has a number of spin-offs in then works. Perhaps the most exciting of the shows to come is the prequel series based on George R.R. Martin's A Song of Ice and Fire book series. The new show is being written by Jane Goldman and, as Harpers Bazaar reported, is set thousands of years before the Game of Thrones series. Goldman's plot shows how the world devolved from its "Golden Age of Heroes" to its "darkest hour." Sounds juicy.

The spin-off is set to begin production some time in 2019, CNN reported, and no specific premiere date has been announced — although it will come in 2020. But fans will have plenty to keep them occupied as the final season of Game of Thrones unfolds beginning in April.