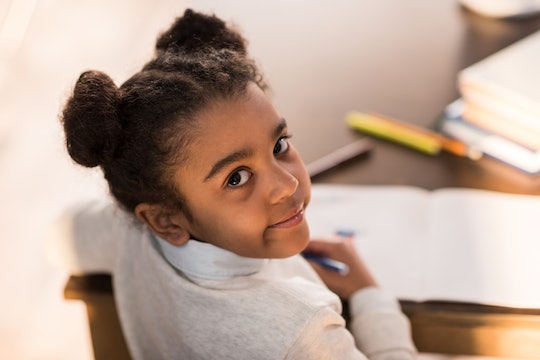 This One Kids' Clothing Trend Makes Us Hopeful For The Future

When my husband and I found out we were expecting a baby this past August, we were over the moon. Like any parents-to-be, we immediately started planning and daydreaming about the future. In this huge, complicated world, who will this little human being be? The only thing we know for sure is this: she'll be whoever and whatever she chooses, and unexpectedly, the gender-neutral kids' clothing trend makes us more hopeful for the future than anything else.

Ideas about gender identity are shifting. With each passing day, it seems that more and more people are recognizing and accepting that gender identity may not be such a black and white concept. In communities everywhere, people are having long overdue conversations that the preconceived ideas of what it means to be male and what it means to be female can be restrictive and, quite often, even harmful. As this societal perception of gender begins to evolve, industries are changing right along with them, and the trend of gender-neutral clothing is a tangible sign of that.

As a high schooler, I worked part-time at a local shoe store in my small town. We had a massive section of children's shoes, and my co-workers always (graciously) let me handle the kids that came into the store – they were my favorite customers. Almost daily, I'd watch kids toddle over to the display and grab whatever shoe caught their eye. Repeatedly, I'd listen as parents critiqued their child's choice: "Pink? That's for girls. How about blue or black?" or "No, blue's a boy color. What about this pretty purple?" Though I knew the parents weren't intending to be malicious, it always made me sad. Seriously? Their child is restricted to one or two "permissible" hues, simply because of their genitalia? There are so many appealing colors, and childhood especially should be the time to enjoy them unabashedly.

The entire point of gender-neutral clothing is to do away with the idea that your sex dictates what you can and can't wear. Recently, Celine Dion received some attention for her own gender-neutral children's line CELINUNUNU, a collaboration with the brand NUNUNU. Tali Milchberg, one of brand's founders, explained to People, "We have nothing against blue and pink — nothing. We’re just saying to be open-minded. We want to give an alternative to kids of the future." And it's not just fresh brands like NUNUNU and Bass & Sass who are recognizing that there's a market for for neutral clothes. Even big-name brands and retailers like Carter's and Target have the option to actually filter out all the neutral or unisex clothing options on their sites.

My mom loves to tell me about what a monster I was when I was a child. To say I was "particular" was an understatement. I shrieked if my parents tried to dress me in pants – I wanted pink dresses, frilly socks, and ribbons in my hair at all times, regardless of the weather outside. I looked like a "girly girl" through and through, but here's the thing: I chose that. I had developed my preferences, and a loud, demanding voice to match, and my parents gave me the freedom to dress how I pleased. This freedom is exactly what the gender-neutral clothing movement is advocating for. Fortunately for me, there was no shortage of pink dresses to choose from... but what if I had been wailing for gender-neutral rompers and t-shirts? My options would have been scarce.

There seems to be a common misconception that gender-neutral clothing is all about rejecting "traditional" clothing, or criticizing any parent that dresses their child in stereotypical hues. On the contrary, these newfangled brands don't aim to vilify parents (and children) who select the conventional colors or styles. Instead, these companies hope to offer variety and choices for the children who just don't feel like themselves in those long-established palettes.

Without fail, the term "gender-neutral" can cause immediate eye rolls and exasperated sighs from parents who don't believe clothing color really matters. It's understandable – it's a superficial thing to be concerned about, right? Well, not really. Gender-specific clothing is often one of the first ways kids are exposed to gender expectations and norms: little girls are princesses and angels, while little boys are troublemakers and heartbreakers. Girls are feminine and dainty in pastel hues, while boys are tough and adventurous in bold primary tones. These early introductions to stereotypes lay the groundwork for what children expect of themselves – in fact, research in the Journal of Early Childhood Research shows that by age four and five, preschoolers are showing sex-typing in their career aspirations. In other words, young children are already gunning for jobs that are deemed "for women" or "for men."

Additionally, the benefits of allowing your child to express themselves through their clothing choices are plentiful. Children don't have many choices. They can't choose where to live, where to go to school, or even how to spend their time. When parents give their children "inconsequential" choices, like what color or style of clothing to wear, they're letting their child experience a little bit of autonomy and independence. Occupational therapist Dr. Allie Ticktin explained the benefits of giving children choices in an article for Motherly. "A child's choice has as much value as an adult's, and we want to make sure that our children know that we recognize that and acknowledge the value that they add to the family," explained Dr. Ticktin. "Recognizing their small choices is an easy way to empower our children and acknowledge their worth." What could be a more invaluable early childhood lesson than that?

Gender-identity is a complicated subject, but gender-neutral clothing is one trend that tells me we're on the right path. Regardless of whether your little one dons pinks, blues, or neutrals; whether they choose bows, monster trucks, glitter, monsters or a lovely hodgepodge of all of the above, one thing is certain: letting them decide for themselves is a beautiful thing.