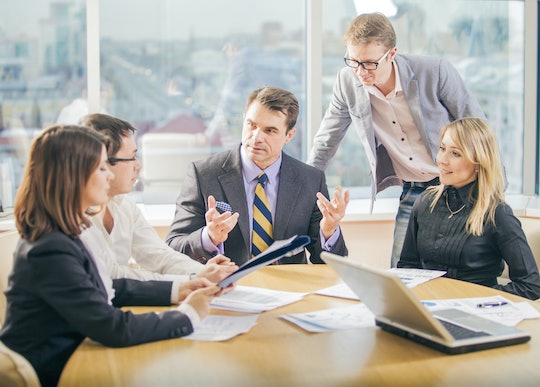 On Wednesday, House Republicans voted against an amendment that would protect funding for the collection of data on pay by the Equal Employment Opportunity Commission. The EEOC under President Obama created a requirement that made it so private employers with more than 100 workers, as well as federal contractors with more than 50 employees, had to report their staff's compensation broken down in terms of sex, race, and ethnicity. The move was an attempt to better analyze racial and gender disparities in pay in America, and now that important work might face a huge setback. The vote on Wednesday was especially discouraging, because new Census data has found that the gender pay gap won't close until 2059, according to Vox.

And that's just for women in general. Hispanic women will have to wait until 2248 for pay parity with men, and by comparison, Black women have to wait, according to the Institute for Women's Policy Research.

Plus, where you live matters when it comes to equal pay as well. The IWPR reported that in North Dakota, Utah, Louisiana, and Wyoming, the gender wage gap won't close until the 22nd Century. Why should so many women wait around that long to be paid equally to men for equal work?

Women, in general, still earn 80 cents for every dollar earned by a man, according to the IWPR. That sort of ludicrous, unequal pay has the greatest affect on women who earn the least amount of money, according to CNBC.

Women make up half the college-educated workforce in the United States, according to USA Today. We're putting in the time and getting the education to deserve equal pay, but it's not manifesting. So when a presidential administration puts the breaks on exploring why pay parity is still not a reality, it's incredibly disappointing and very regressive, to say the least.

Data shows that regardless of the level of qualification, jobs predominantly done by women pay less on average than jobs usually done by men, according to the IWPR. That should trouble anyone who reads that fact. It means that, similar to the possibility that the end of the pay gap is further off depending on your race or your location, your profession matters too.

In some industries, such as construction, the IWPR reported that when it comes to better integrating both genders, there has been no progress in 40 years. None! How can we improve the disparities in pay for industries that predominantly employ one gender or another when we can't make progress on integrating those professions?

So what can we do to solve the problem of the gender pay gap? One question we can always ask ourselves is: what would Oprah do?

A recent TIME report about women who are breaking glass ceilings in their respective fields featured Oprah Winfrey, noted as the first woman to own and produce her own talk show. In a video, Oprah talked about a time when, following the success of The Oprah Winfrey Show, she went to her boss and asked that her producers — who were mostly women — get a raise. In the video, Oprah said:

I was making a lot of money, and my producers were still getting the same salary. I went to my boss at the time, and I said, 'Everybody needs a raise.' And he said, 'Why?' He actually said to me, 'They're only girls. They're a bunch of girls, what do they need more money for?'

Oprah told her boss that either her producers were going to get raises, or she wouldn't work. So, they got their raises.

The point is, if you're in a position to speak out against unequal pay, you should do so. It has the potential to benefit a whole lot of people, because closing the pay gap could lead to things like countless families — which rely more and more on women’s wages to help make ends meet — being more financially comfortable. With the current gender pay gap, the average American woman earns $10,000 less than the average man every year, and that equals out to almost half a million dollars less over the span of their careers, according to The Huffington Post. Think of how equaling out those wages could impact women, mothers, and families.

Another step you can take is to contact your elected officials, and demand that they work to end the gender pay gap on a legislative level. Even if it seems like the current administration is not interested in the topic, senators and members of Congress can try to do what they can on their level, and you need to hold them accountable to do that.

The fact that the IWPR found that the gender pay gap won't close until 2059 should be unacceptable. We all need to do our part to bring that number a little bit closer to the year 2017.

More Like This
Here’s How To Fight For Abortion Rights
Obamas Issue Powerful Statements After Supreme Court Ends Roe v. Wade
Keep Talking To Your Kids About Abortion — It's More Important Than Ever
13 Going on 30 Is Just As Sweet & Funny As You Remember — And Kids Will Love It Too