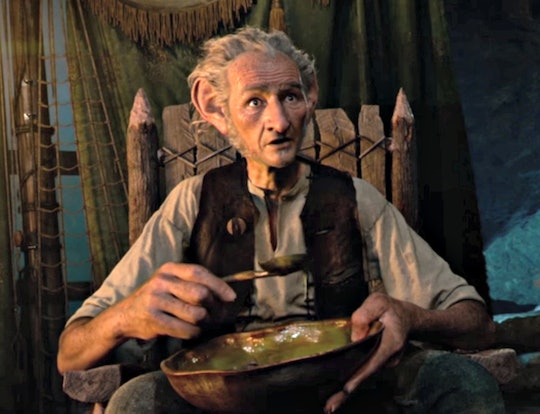 In Giant Land, a fart is a whizzpopper. Now that The BFG is on the big screen, it's likely the word "whizzpopper" will be creeping into the vocabularies of kids everywhere. The Giant's word for a fart is only one element of author Roald Dahl's made-up language, Gobblefunk. It's as fun to speak as it is to read; now, it's even getting its own dictionary.

Dahl would be 100 years old in 2016. And, to honor his life, the linguistic wizards of Oxford University Press created The Oxford Roald Dahl Dictionary, BBC America reported. Available for pre-order now, the book is packed with all of the whimsical words Dahl dreamed up for books such as The Witches and Matilda. Legal-pad writings by Dahl obtained by Oxford University Press show that the author would often draft words multiple times, carefully refining his language for sound and meaning. Writing for Oxford, blogger Robert Hughes gave an example of how Dahl may have puzzled through wording in Charlie and the Chocolate Factory:

Take Oompa-Loompa for example. Was Dahl thinking of oompah-pah, the rhythmical sound of deep-toned brass instruments? Lump? maybe Karl Marx’s lumpenproletariat. There are resonances with loom, and so with workers in the vast factories of the Industrial Revolution.

Perhaps the most pervasive use of wacky wording is in The BFG. Gobblefunk, the language of the giants, isn't entirely mumbo jumbo; according to Entertainment Weekly, Dahl rooted his lexicon in real English words. BFG director Steven Spielberg said that, because the vocabulary's meaning is largely conferred by its association to English, translators may find it difficult to properly adapt the wording of the film for foreign audiences. That didn't stop the production team from integrating as much Gobblefunk as they could. Mark Rylance, who plays the Big Friendly Giant, said that he personally championed the language's inclusion in the movie, according to EW:

I was very keen to put more of it back, and when Steven heard me speak it, of course it was more understandable then when you look at it on the page. So Melissa and I had a lovely time going through the script and comparing it to the book again and putting a bit more Gobblefunk back in.

That means it's likely that parents will be hearing about whizzpoppers more often. Hughes wrote that, even before the movie, a friend of his who teaches said that kids who discover Gobblefunk are quickly enamored. They'll try out their new vocab words on adults, then take a "little glance up to check that the sky hasn’t fallen in and that it really is OK to use words that are not in a dictionary and which seem so full of adult-defying rudeness." Educators often realize, though, that it's the absurdity of the language itself that gets kids excited to read.

Of course, moms and dads don't have to be left out of the loop. Grown ups who never devoured The BFG in elementary school may opt to check out one of the many handy guides online: try Scholastic's Gobblefunk Glossary, the BBC's Gobblefunk word roundup, or the official Gobblefunk Glossary on Dahl's website. Parents will be totally prepared to discuss the story with their kids over an imaginary, scrumdiddlyumptious meal of snozzcumbers (the BFG's alternative to eating "childers") and frobscottle (think giant ginger ale). Learning the laughter-inducing language together also offers tools to defuse any one of the perilously unsettling situations of childhood. Dahl called disasters catasterous and nightmares trogglehumpers, according to Scholastic. With these words, he helped kids confront fear by replacing scariness with silliness. If kids can learn to do that outside of the pages of a book or the scenes of a movie, how whoopsey-splunkers would that be?