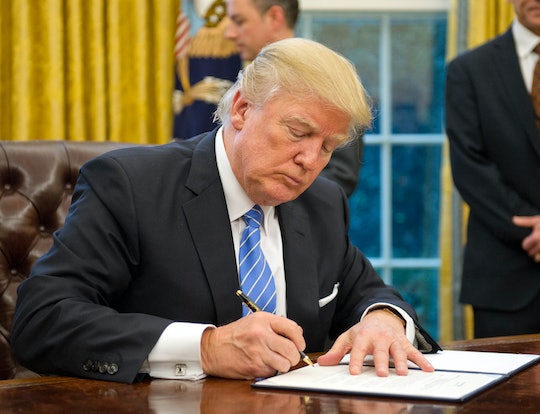 Just two days after millions of women took to the streets across the country to protest threats against equal rights and just one day after the 44th anniversary of Roe v. Wade, the Supreme Court decision that legalized abortion in the U.S., President Trump just reinstated the "Global Gag Rule," which will bar any foreign organization that accepts U.S. money from talking to women about abortion. Here's how the Global Gag Rule will increase abortions worldwide. Science and history show how dangerous this motion will be.

The global gag rule, which is also known as the "Mexico City Policy" according to BuzzFeed isn't anything new, and it's been shown to drive up not just abortion rates, but maternal mortality rates as well.

Marie Stopes International, a family planning partner of USAID, predicts that Trump's new global gag rule will increase the number of worldwide abortions by 2.2 million, and 2.1 million of those will be unsafe, BuzzFeed reported. “The death rate both from maternal mortality because of more pregnancies and from those seeking unsafe abortion is going to rise quite dramatically,” Marjorie Newman-Williams, a vice president and director for MSI, told BuzzFeed.

The global gag rule was first enacted by President Ronald Reagan in 1984, according to New York Magazine, and has been canceled by each subsequent Democratic president and reinstated by Republicans ever since. Trump is following in that tradition.

According to The Atlantic, a Republican president signing the global gag rule around the Roe v. Wade anniversary has emerged as a way to show to the anti-abortion wing of the party that the incoming administration is committed to pushing back against abortion rights around the world.

The effect of the global gag rule is to force organizations that help with women's services to choose whether to offer safe abortions or lose the U.S. funding that pays for all of the other services it offers, New York Magazine reported. But the ceremonial effort made by anti-abortion Republicans aimed at wiping out abortions actually has the opposite effect.

The Trump Administration and Republican leadership have made no secret of their dangerous obsession with rolling back reproductive rights. President Trump’s reinstatement of the Global Gag Rule ignores decades of research, instead favoring ideological politics over women and families. We know that when family planning services and contraceptives are easily accessible, there are fewer unplanned pregnancies, maternal deaths, and abortions.

A study from Stanford University in 2011 found the unintended consequence of the Global Gag Rule or Mexico City Policy is to limit the availability of family planning services overall, and in turn contraceptives that could prevent pregnancy, making abortion the only means to prevent unwanted children, according to The Atlantic. The study found:

If women consider abortion as a way to prevent unwanted births, then policies curtailing the activities of organizations that provide modern contraceptives may inadvertently lead to an increase in the abortion rate.

According to BuzzFeed, the 2011 Stanford study found that, during the last time the global gag rule was in place under President George W. Bush, the abortion rate climbed by more than 40 percent. The World Health Organization found that 13 percent of maternal deaths are caused by unsafe abortion, BuzzFeed reported. More abortions that aren't done in proper women's healthcare facilities means more unsafe abortions, which means more maternal deaths.

So while this is likely just an instance of symbolic politics for Trump, the real-world implications will hurt — even kill — women all over the world. And that's not politics — it's history.