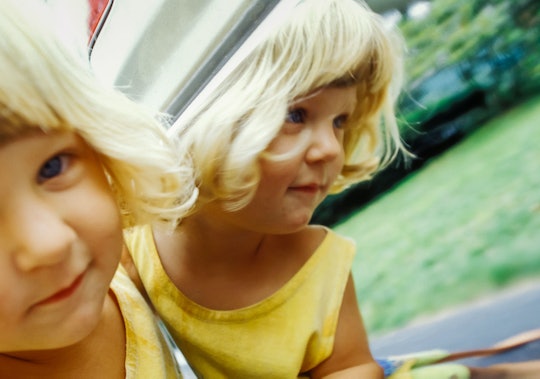 'The Golden State' Finds Motherhood Out In An Endless Expanse

I was unprepared for a lot of things when my daughter arrived during a bitter cold snap in late January. Like all new parents, we limped towards some answers. But, what we’d never prepared for, what I never figured out as weeks turned into months, what no one had warned me about in all their good natured ribbing about never sleeping late again and never ending piles of laundry, was the absolute nothingness of new motherhood.

I sought out books about motherhood, fiction and memoirs to replace the pregnancy guides and childrearing manuals I’d gobbled up pre-baby. I was excited to read others stories with my new hard-won inner knowledge about motherhood, it would be like visiting a foreign country after learning to speak the language.

But I found myself resenting the characters. I’d read descriptions of their lives with their children: dutiful, almost surface level, reports of sleeplessness and exhaustion, cracked nipples and leaking breasts. The monotonous tasks that filled my days seemed ramrodded into the character’s existence, yet gone about with a joyful purposefulness. Characters’ babies cried quick and loud but were immediately pacified; there was no need for mothers to sway and rock and bounce on an exercise ball for hours singing and shh-ing. Characters’ babies fed on 3-hour schedules; there was no need for mothers to sit shirtless for endless hours as their babies cluster feed. Characters’ babies napped as necessary; there was no need for mothers to clutch the monitor, praying their child would sleep for just ten more minutes. Five more minutes.

I didn’t brush my teeth for two weeks after giving birth, yet here was a mother laying her newborn in the bassinet where it quietly dozes as she makes chicken stock and a pie.

The repeated nothingness that filled my days with the baby didn’t appear in any narratives about motherhood, seemingly reserved for the banalities of the life of men (Leopold Bloom filling hundreds of pages with a single day) or institutions at least 50% men (Jonathan Franzen’s tome Freedom filled with long digressions about the inner workings of marriage and relationships.) But motherhood — that physical and emotional seismic shift in a person’s life — apparently didn’t warrant meditation, instead written about with practical straightforwardness (someone is holding the baby in their arms; someone is feeding the baby during dinner; the baby is napping; the baby is quietly stacking blocks) all in the background, just to the side of the plot.

Daphne has the same ineffable aimless feelings spending long (sometimes glorious, often tedious) days with her daughter as I do, and, just like, real life, there is no escaping it.

But then I opened The Golden State by Lydia Kiesling and, oh, there it was: the pooling postpartum quicksand I’d been slogging through, bleeding out on pages so perfectly it made tears prick at the back of my eyes.

The novel, which is now out in paperback, is ~about~ young mother Daphne who, after months of being left alone to single-parent her toddler after a clerical error strands her husband abroad finally snaps, abruptly packs her toddler into the car and takes off to find refuge in the California deserts. Daphne’s basic actions and interactions provide a skeletal structure (there’s a side plot about a California secessionist group; another towards the end about a road trip with an older woman) but the meat that hangs on the bones is nothing but the relentlessness of motherhood.

As I read I am consumed with understanding for Daphne and her shapeless days with her daughter, Honey. The fears and worries of motherhood giving way to the desire to make the expanse of day just a bit easier (cheese stick after cheese stick after cheese stick.) The perfectly captured triumph of early day, disappearing as the sun rises higher in the sky. “The golden hour of morning success comes to a close,” Kiesling writes of narrator Daphne, “and I feel the endless day stretching out before me.” The push and pull of simultaneously longing for the freedom of your childless-self while being consumed with animal-instinct love: “I'm simultaneously desperate to cuddle and unable to deal with her."

Daphne has the same ineffable aimless feelings spending long (sometimes glorious, often tedious) days with her daughter as I do, and, just like, real life, there is no escaping it. There are no other characters here to take the narrative spotlight. There is no more pressing plot to return to after brief check-ins with baby. In The Golden State, motherhood is the main ring event.

Pages in The Golden State are dedicated to events that would take seconds in real life but live in the minds of mothers for minutes, hours, days after they occur.

Keisling takes the everyday moments of motherhood and elevates them to a level I’d never seen before: a level of startling importance enough to generate pages of description, whole paragraphs revolve around Daphne’s meditation of what to feed Honey for lunch or the mental gymnastics of deciding when to keep your fussy toddler out in public versus when to pack it in.

Though so many others had told me, it wasn’t until my own child arrived that I saw how all-consuming these things are in your mind, the concerns always humming in the background, feeling always (always!) at the highest level of importance. Pages in The Golden State are dedicated to events that would take seconds in real life but live in the minds of mothers for minutes, hours, days after they occur: struggling to get your stroller up entryway steps, both wanting and dreading someone will help; praying for bedtime only to feel your heart breaking with longing for your smiling, giggling child so you cry for your impatience during the day while scrolling through pictures on your phone; the meditative trance of pumping — the ritual of unpacking the parts, the mechanical hum, the chill in the air as you sit half-naked, the tiny bags of milk, the washing and repacking knowing you’ll do it all again in just a few hours; the pack and play (just… the pack and play.)

Keisling is hypnotic in these descriptions, sometimes detached, sometimes sentimental, but always understanding of the sheer amount of mental energy it takes to keep a tiny human alive. These things (collapsing the stroller, reading a board book, changing a wet diaper) are nothing and everything, meaningless and maddening. Daphne struggles to find a purpose to her days, forcing little adventures to a fancy steakhouse or the public library or a playground, but more often than not the day ends with laying Honey down and simply sitting in the calm of night before the sun starts to rise and she’ll have to do it all over again. In Daphne, I finally see the first mother-character accurately, sometimes painfully, stranded in the all encompassing riptide that is early parenting. In Daphne, I see my experience, the simple fact that you can love being a mother, but it’s okay if you don’t always like it.

I read The Golden State like a love letter to mothers. It says I see you and I know this is hard and that’s it. There are no “I am your calm; you are my wild” motherhood epiphanies.

Instead, in the end, the glories of motherhood are revealed as straightforward as the struggles. I read the last line, as Honey “reaches up her arms to her mama” and think of my own sweet daughter reaching for me with all the trust in the world, my ability to make her feel nothing but safe just by holding her against my body, the whole universe in our warm skin and beating hearts, and think yes, there is also magnificence in motherhood.

The Golden State was longlisted for the Center for Fiction's First Novel Prize and is now out in paperback.