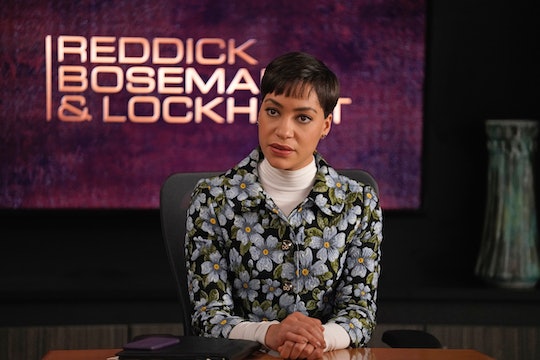 'The Good Fight' Takes Another Story From The Headlines

The Good Fight often finds a way to work complicated real-life scenarios into its episodes, delivering ripped-from-the-headlines storylines almost every week. In the fourth episode of Season 3, Lucca Quinn finds herself at the center of something many real people have been forced to deal with: being unfairly targeted because she's black. In this exclusive clip, The Good Fight shows racial profiling when another mom calls the cops on Lucca at the park.

When the clip begins, it could be any normal, uneventful day in Lucca's life. She got bundled up and took her baby to the park, where she sits on the benches amongst the other moms and their kids. But today, a woman she doesn't know (credited on IMDB as "Stacy") decides to strike up a conversation — and she makes some immediately uncomfortable assumptions about Lucca when she does so.

First Stacy offers unsolicited advice. She tells Lucca to put a scarf on her baby, then to give him Tylenol so he doesn't get a cold. Lucca is uninterested in the so-called help, but doesn't start to get annoyed until Stacy says, "I'm guessing that you haven't been a nanny for very long." Because, of course, a woman of color must be the nanny — not the baby's mom.

Lucca decides to respond with humor. With a totally straight face (but obvious sarcasm), she tells Stacy that she found the baby at a Whole Foods, "near the bulk peanuts." Stacy asks if that's a joke, which is when Lucca chooses to exit the conversation. "Okay, strange baby, let's go," she says, wheeling her stroller away. "Time to sell you on eBay!"

Though it's quite clear that Lucca is kidding because she's fed up, Stacy takes her statements very seriously. She nervously asks the other moms if they know who Lucca is and if she'd had the baby when she arrived in the park. Then she makes a phone call to the police while following Lucca to her car. She relays her concerns rapidly, saying, "Look, I'm not sure what I'm dealing with here, but it's a woman who says she isn't the nanny but she's African American and the baby is white — no, this is not racist, I'm just concerned —"

That's when Lucca notices she's being trailed, at which point Stacy ups the ante. She informs the person on the phone (presumably an officer) that Lucca said something about drugs, that her "friend" had drugs in their car. Viewers know that Lucca said nothing of the sort, so Stacy is outright lying at this point. But she seems convinced that she's in the right, even going so far as to intervene when Lucca tries to get in her car.

Lucca tells her to get a grip, but Stacy physically puts herself in front of Lucca's open door so she can't put her son in the car. When Lucca protests that this is her baby, Stacy starts shouting for help. At that point, the police arrive and the clip cuts off. This echoes many recent stories in the news of white people calling the cops on people of color who aren't doing anything, interpreting their utterly banal behavior as criminal because they aren't white.

The clip doesn't reveal how everything resolves, so fans will have to catch the whole episode when it becomes available on CBS All Access on Apr. 4. But the title of "The One with Lucca Becoming a Meme" indicates that the reverberations of Lucca's ruined morning will continue throughout the episode.

Editor's note: An earlier version of this post incorrectly said that the show would be available on Apr. 3. It has been corrected.