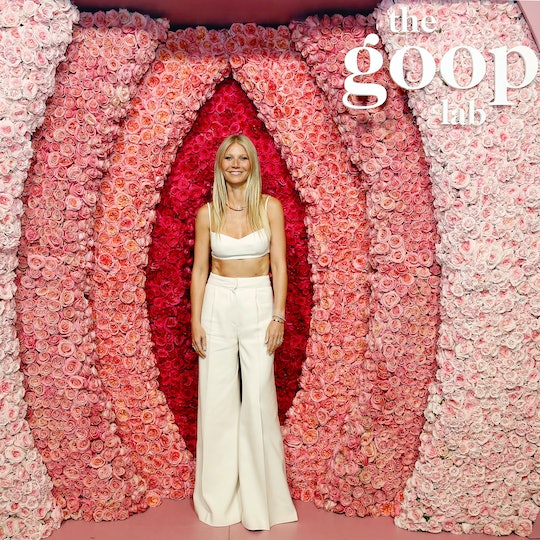 The Goop Lab Almost Convinces You To Don The Boilersuit

Admitting you don’t know everything is the price of entry into The Goop Lab — Gwyneth Paltrow realizes onscreen that she has confused the word “vagina” with “vulva” for her entire life. To be fair, many women don't understand the difference between a vagina and a vulva, which is a part of the reason Gwyneth's new Netflix show is so dangerously relatable — and it's also why you'll find the image of her standing in front of a vulva made from flowers less silly and more, Ah. Yes. There is power in the vulva, but more importantly, there's power in the knowledge of a vulva.

In the opening of the first episode, Gwyneth chats with her cohort of pretty people, laughingly wondering how she can "milk the sh*t" out of life," and explains that Goop, and the show, are seeking to determine just how to do that. In each episode, she, and Goop's content director — and Gwyneth's sometimes guinea pig, sometimes sycophantic acolyte — Elise Loehnen sit down with different experts to discuss alternative, and sometimes radical, therapies and lifestyles that they purport might lead to better mental, physical, and spiritual health. After the initial Q&A with the week's experts, the Goop Lab team set out to test these treatments and track their results, all over the course of about 28 minutes.

The show, with its conversational style and tongue-in-cheek attitude is compelling and relatable, which is worrisome. Most of the therapies presented are not recommended by most medical practitioners, and even though they are presented as infotainment, it is easy to become ensnared. After all, who wants to live a dreary, short life? None of us. Viewers watching The Goop Lab, even one as skeptical as myself, find themselves agreeing, silently nodding their head. They're thinking yes, Gwyneth, teach me how to squeeze the teat of vitality. At the same time, viewers are also acutely aware of the consumer quality of the presentation and the cult-esque and seductive invitation of what she's selling, and make no mistake, this is a capitalist venture. While the show doesn't have pop-up ads for Goop's Shiva Rose $95 Love Oil, the website is always a huge part of every episode, and they are using their legion of gorgeous staffers with glowing skin and deep emotional connection to gas up that brand. And they do it with aplomb.

The fact that Gwyneth and her team come across as vulnerable, questioning, and more than a little bit in on the fix, allows the viewer to see themselves in its membership and already looking for the perfect long-sleeve, button-down boilersuits. The apparent uniform of the House of Goop. (Good news: They sell one at The Gap.)

Wellness, to the Goop Lab, happens in a sunlit Santa Monica studio where all of the seating is millennial pink and everyone knows their angles. In each installment, whether The Goop Lab team is discussing their diet or their vulvas (those who have them), the setting is designed to feel like an expensive waiting room at a fancy doctor's office, lending an additional air of authority and respectability. The Goop troupe stacks the deck with PhDs, chiropractors, and trained psychiatrists from all over the world who are willing to confirm their arguments. There's always someone available to make reasonable the fantastic claim of the installment, whether it's how psychedelics could be used to treat anxiety or how fasting can add years to your life.

And there are always true believers. There is an episode featuring internet celebrity Wim Hof (also known as "The Iceman") who, while mourning the death of his wife by suicide, sought out ways to heal his own pain and sadness. Eventually, he claims that he found that healing in breathing exercises and plunging into the icy fjords of the Netherlands. He took his cure to the masses, subjecting himself to medical experiments and setting the Guinness Book world record for swimming under the ice. The man makes for fantastic television. His strong Dutch accent and upbeat personality captivates as he runs the Goop group through somewhat maniacal breathing circuits and bikini-clad yoga flows on the pristine snow on the banks of Lake Tahoe. If one was to watch only these portions of the episode, it would be simple entertainment, a chance to laugh with and at its performers as they leap off a dock into ice cold water and rub their backsides into the fluffy powder. But it's not so simple as that.

To buttress Hof's claims that his "three pillars" of cold therapy, breathing techniques, and commitment can heal the body and the mind of myriad ailments, there is a man who offers his own story of how Hof's chilly techniques allowed him full range of flexibility in spite of his diagnosis of Guillain Barre Syndrome. Before our very eyes, we watch this man with a debilitating nerve disorder throw himself onto the ground into a split. It feels like more like a faith healing revival tent testimony than anything you'd find happening at a "research lab," and it's endlessly compelling.

Also, it needs to be asked: why is Hof allowed a t-shirt and hat, and the participants are strictly in their swimming chonies? It bothered me the whole time.

That is obviously not all that niggled at me. There is a particular cynicism flowing through the the subtext of each episode. The Goop Lab is undergirded by a type of false skepticism that comes from the troupe, who jab elbows and wink at each other whenever something really silly happens. They're in on it, but they're also true believers. It's like someone selling you their MLM by saying "I didn't believe it either at first, but..." And because you have come to trust that person, even a little, through their similar discussions of disbelief, you buy the toothpaste/milkshake/wrinkle cream/snake oil. The sense of skepticism offered by either Gwyneth or someone on her team — which is ultimately overcome by the end of the 30 or so minutes of the show — makes it easy to buy the whole package, lock, stock, and plasma facial. Soon, you uncritically wonder if, like Julianne Hough, you also need an energy healing-come-exorcism to remind you of 20-year-old trauma you may carry in your foot. Why simply scream into the void, when you can do it for an audience and pay for the privilege?

And paying is exactly the point. Elise Loehnen frequently makes admissions like "most of the medical community wouldn't agree that this works." Which is exactly the same sort of anti-scientific dinner bell that everyone who shills unproven remedies as potential cures rings. It's that "we are willing to try this, because we know our bodies better than they do, and we're willing to trust the fringe over known fact." It's false hope, wrapped up in infotainment — and it's extremely profitable for Goop, even after legal challenges pushing back against their practices. The company reached a $145,000 civil settlement last year after an investigation into Goop's un-scientific claims, The New York Times reported — barely a drop in the bucket for the company which had a valuation of around $250 million in 2018, per Fortune.

A moment of clarity stuns at the end of "The Health Span Plan" episode. Their (highly reasonable and honestly impressive) experts — Dr. Valter Longo, a researcher of longevity at the University of California, and Yale School of Medicine pathologist Dr. Morgan Levine — wrap up the episode by telling Gwyneth and Elise that living well, for a long time, comes down to mostly what we've been told our whole lives. We should eat well, exercise regularly, and challenge our bodies with some frequency. "This is a Gwyneth-ism," says Elise, reciting one of Gwyneth's catchphrases, "The tenets of health are mostly free." Nevermind the fact that the company sells $75 per month vitamin subscriptions.

There is, however, one episode that I truly believe is absolutely worth watching. "The Pleasure is Ours" features nonagenarian female sex educator Betty Dodson (bedecked in a denim jacket with a patch reading "come together") and her business partner Carlin Ross, who have coached scores of women through the female-bodied orgasm. This is the episode where viewers learn that Gwyneth of the sold-out vagina candle does not know the difference between the vulva (the exterior part of female genitalia) and the vagina (the inner canal). The glimpse of surprise apparent as she's corrected by the educators is genuine, and viewers can relate. Through much of the episode, Gwyneth and Elise giggle nervously, and make quips that let you know they're more uncomfortable than they want to portray, but Dodd and Ross are frank, upfront, and reassuring. Female orgasms are seriously overlooked, but as Dodd says, "It's meant to be fun."

Later in this episode — which honestly feels like a sea change in how we think about women's bodies and pleasure — we are shown a montage of bare, unaltered vulvae set to jaunty piano music. Because, as Dodd says, if Goop were only to show one vulva, then that would become the vulva. It's never pornographic, and it never feels exploitative. Instead, it feels like a conversation and education that was a long time coming.

Dodd says that women are "very dangerous when we're knowledgeable." The show makes you uncomfortable. The orgasm makes you uncomfortable. But that's the point. Most of us aren't comfortable with our own bodies or our own pleasure, and the shocking image of a woman coached to orgasm on screen is designed to help women move on from the mental blockades that hinder their pleasure.

But even with this bright point in the series, the moving, ritual quality of such compelling pseudoscience is still consumer wellness behind its most popular facade. It makes wellness look like it is achieved through glamorous means, instead of what it looks like in real life — going to the doctor, eating right, taking a walk, and lifting some weights isn't sexy. It doesn't look as nice without the backdrop of California's rolling hills or expensive facials. A flu shot is never as exciting as tea named for the dust of the moon, but I can tell you, a lot more research went into the flu shot.