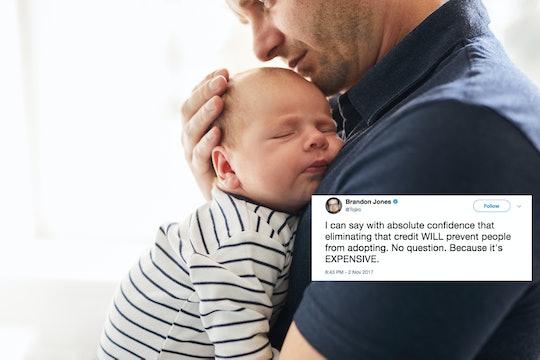 In their never-ending attempts to limit women's access to abortions, Republican lawmakers have frequently used the argument that women needn't terminate their pregnancies if they don't want children — they should simply give them up for adoption to one of the many families who want them. The reasoning generally seems to be that the GOP is happy to spend money on children, just not on abortions. But on Thursday, when Republican politicians revealed their new tax plan, it became clear that the GOP tax plan would cut adoption assistance programs, essentially eliminating the tax credits American families currently get for adopting children.

There's a lot going on in the newly released Tax Cuts and Jobs Act — and plenty for American families to be upset about, including cuts to individual tax breaks for medical expenses, moving, and student loan interests — so you could be forgiven for overlooking the elimination of adoption tax credits for more personally pressing issues. However, it's important not to, even if you have no plans to ever adopt a child.

President Obama made the adoption tax credit a permanent benefit in 2013, according to The Daily Beast, and it allows adoptive parents to write off up to $13,460 in taxes per adopted child. The credit is meant to help ease the financial burden of adopting a child — a process that usually involves adoption fees, attorney and court costs, and travel on either a national or international level. The cost of an international or private adoption can reach $40,000 or higher, according to a report prepared by the Congressional Research Service, an amount that is a huge financial blow to many American families.

Both experts and adoptive parents have warned of the damage that cutting the tax credit could do to children in foster care. "It’s stunning to me that this package that is supposed to be pro-family eliminates the adoption tax credit, which is definitely not pro-family," Michaela Sims, a spokesperson for the Save the Adoption Tax Credit, told Vox on Friday. "At the minimum, it’s a tax increase for families who choose to adopt. But at maximum, it could have a chilling effect on adoption."

Or, in the tweeted words of one father, Brandon James, a developer at Google with two adopted children:

I can say with absolute confidence that eliminating that credit WILL prevent people from adopting. No question. Because it's EXPENSIVE. ... So adoption tax credit goes away and families simply can't adopt any more. Period. Do you think people will stop having babies, though?

No. And the rest of James' thread only proves why this tax credit elimination is such a terrible idea if the GOP actually wants people to adopt children, or wants pregnant people to choose adoption over abortion (that's assuming they even get a say in that decision, which shouldn't be a thing):

And on top of that, if several Republican lawmakers had their way, there would be more babies placed into foster care, since the GOP is currently pushing to ban abortions past six weeks' gestation — which is, quite honestly, before many women have even realized they're pregnant. Another bill, which recently passed in the House of Representatives, would ban abortion at or after 20 weeks.

In 2012, approximately 40 percent of all pregnancies in the United States were unintended, according to a National Institutes of Health study, and half of those pregnancies ended in abortion. If the GOP manages to further limit access to abortion (and continues to make access to contraceptives more challenging), we would likely see an increase in the number of unplanned pregnancies and a decrease in the number of abortions. And that means more kids going into the foster care system.

If "pro-life" politicians are pinning their anti-abortion rhetoric on the idea that we cannot hurt children, then they need to advocate just as fiercely now for the children who'd be hurt by the repeal of the adoption tax credit. Because if this isn't worrisome to the people currently advocating for the protection of fetuses, then pro-life Republicans are going to have to admit that children's wellbeing isn't really what drives their aversion to abortion.