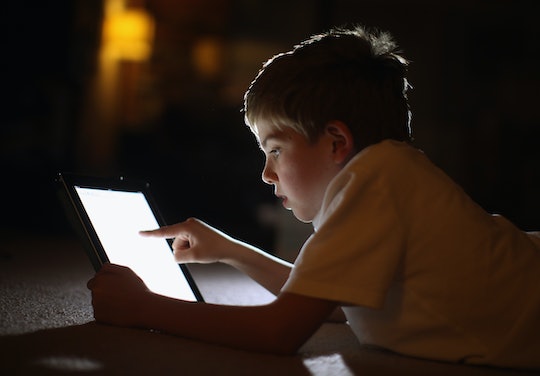 According to The New York Times and several other sources, passengers flying into the United States from 10 Muslim-majority country airports are now allowed to bring their laptops or other large electronic devices into the cabins with them once more. The Trump administration's electronics ban was imposed in March, and reportedly included things like tablets along with laptops. But now that the laptop ban was lifted, people who may have been heavily affected by it — like parents trying to keep their kids entertained on a long flight — can breathe easy.

The New York Times reported that the Department of Homeland Security has lifted the ban because all the airlines and airports that were impacted have complied with the first phase of new standards the department enacted. It was reportedly put in place because of worries that ISIS could develop bombs that could be hidden in portable electronic devices, such as laptops or tablets (despite the fact that that hasn't happened).

The lifting of the ban is probably welcome news to any parent who might have plans to travel between the two regions, because the trip would be long enough for an adult, and probably seems even longer to a child. Without something to entertain and distract them — like, say, Frozen playing on a tablet device — the long flight could prove to be stressful for both parents and kids.

According to CBS News, large airports in the Middle East are now conducting other security measures — like checking electronic devices to be sure they don't contain bombs and pulling more people out of lines at the airport for additional screening — that federal officials feel the laptop ban is no longer necessary.

In a statement released to CBS News, officials said communication between the DHS and Transportation Security Agency resulted in the increase in airline safety that led to the ban being lifted. The statement read:

Airlines were able to implement the necessary enhanced security measures because of the close coordination and extensive communication between aviation partners and DHS/TSA. As we continue to secure global aviation in the coming weeks and months, this communication and partnership between the private sector and the U.S. government will be imperative.

The idea that they'll be continuing to "secure global aviation" could mean other security measures that could impact all flyers, including parents and families, might be imposed in the future. But for now, the laptop ban — which had some parents stressed out over the thought of what could be a 14-hour flight without electronics to distract their children — is no longer in place.

In fact, according to the BBC, when the Federal Aviation Administration announced electronics could stay on throughout all flights back in 2013, it was parents who were most pleased by the news, according to a survey by Dish Network Corp. Can you really blame them? According to GrowingWireless.com, 55 percent of parents with a tablet use it to keep their children under 12 years old entertained while traveling. And that number even seems a little low to me.

The New York Times reported that the ban originally applied to airports in "Amman, Jordan; Cairo; Istanbul; Jidda and Riyadh in Saudi Arabia; Kuwait City; Casablanca, Morocco; Doha, Qatar; and Dubai and Abu Dhabi in the United Arab Emirates." So parents traveling from those areas to the United States no longer have to worry about not being allowed to have a laptop or tablet available for their kid(s) for the extended flight.

Although those parents can breathe a sigh of relief, other parents may have to gear up for a similar issue if they're flying from Mexico to the United States. The Los Angeles Times reported that the DHS has instituted heightened security measures for tablets and laptops on flights headed to the U.S. from Mexico, and that those measures affect anything bigger than a cell phone.

Mexico's Transportation Department recommended that air passengers carry as few of those devices as possible in their carry-on bags or into the cabin of the aircraft, as those electronics may be still allowed, but might undergo additional, separate security checks. Because a longer security screening is probably exactly what every parent wants to deal with while traveling with a child, right?

But for now, parents traveling from countries in the Middle East no longer have to worry about the laptop ban affecting them and their kids, which means less stress for parents and families.