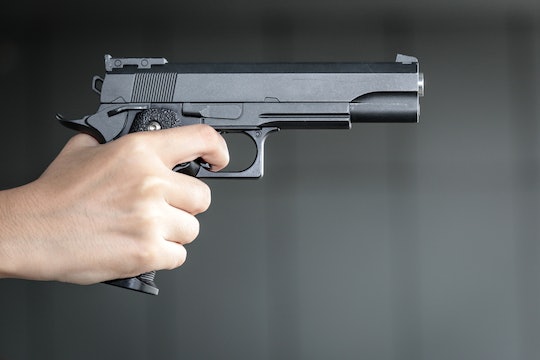 The Government Made A School Shooting Simulation For Teachers, & It's Dangerously Misguided

On Tuesday morning, a school shooting in Benton, Kentucky, left at least two person dead and 14 injured, according to CBS. It's the second school shooting to take place in 2018, and if this year is anything like the previous — 2017 was the deadliest year on record for mass shootings — it likely won't be the last. There is very real cause for concern, but federal agencies' reaction to the risk should infuriate everyone: instead of doubling down on gun control, the federal government is making a school shooting simulation for teachers in an attempt to practice safety protocols in an active shooter situation.

More Like This
The Obamas’ New Family Rule? Get Vaccinated If You Want To Hang Out With Us
People Have Thoughts About A Mom Saying That Parents Are "The Real Teachers"
Look At All These Ridiculously Cute Pics Of Princess Charlotte Growing Up
This Problem-Solving Toddler Filled Up His Toy Car With “Gas” From The Garden Hose

The simulation is a joint effort carried out by the United States Army and the Department of Homeland Security, and it allows people to role-play as first responders and teachers in a school shooting situation, according to The Verge. It's part of the Enhanced Dynamic Geo-Social Environment project (also known as EDGE), a $5.6 million program that started as a training system for police and fire agencies and is now being expanded to civilian use. The version being adapted for teachers and school personnel, according to the Associated Press, should be ready by spring 2018.

“With teachers, they did not self-select into a role where they expect to have bullets flying near them. That's something that they did not choose," Tamara Griffith, a chief engineer on the EDGE program, told the Associated Press. She continued:

We can prevent a lot of these deaths. We can prepare people better. We can make this a safer environment if we can get this into the hands of the right people.

Glimpses of the simulation can be seen and heard in the Associated Press' coverage — and knowing that it's based on real school shootings makes it difficult to watch. There are children screaming frantically, realistic calls to emergency services, and teachers have to choose between different methods of protecting students, from locking doors to creating barricades.

Simulation players can choose to take the perspective of a teacher, of a first responder, or of the shooter themselves (a perspective that's intended to familiarize first responders and teachers with what a shooter might be thinking or plotting). The program's creators studied dispatch tapes from past school shootings to infuse the simulation with realistic details, and they spoke to the mother of a child killed in 2012's Sandy Hook Elementary School shooting to further understand what happened that day.

If that all sounds disturbing, it should be. If this were a final, last-ditch security measure put in place to try and ensure that children are as safe as possible in public buildings, that would be more understandable. But considering that the House of Representatives loosened gun safety legislation just over a month ago makes the simulation harder to stomach.

At this point, multiple studies have proved that states and countries with more guns have more gun deaths, while states and countries with tighter gun control laws have fewer. The United States is home to nearly half of the world's civilian-owned guns globally, despite only having 4.4 percent of the world's population, according to Vox. And with that proliferation of firearms, it's perhaps no surprise that, on average, 5,790 children are admitted to emergency rooms with gun-related injuries every year in the United States, according to a study in Pediatrics. Close to 1,300 are killed by guns every year.

The answer to gun violence in the United States is not to train educators — who are already, in many cases, overworked and underpaid — to deter school shooters. To even ask teachers to do that is to, essentially, ask them to put their lives and wellbeing on the line so that politicians can continue to enjoy funding from gun rights interest groups. It is telling educators and students to simply "try and survive better" while doing nothing to take firearms out of shooters' hands — or, in some cases, while making it easier for them to get their hands on guns.

The existence of such a simulation should be a cause for outrage for all parents out there. Because until the federal government actually prioritizes gun safety, a simulation training teachers to lock their doors amid a shoot-out is a bit like putting a band-aid over... well, a gunshot wound.