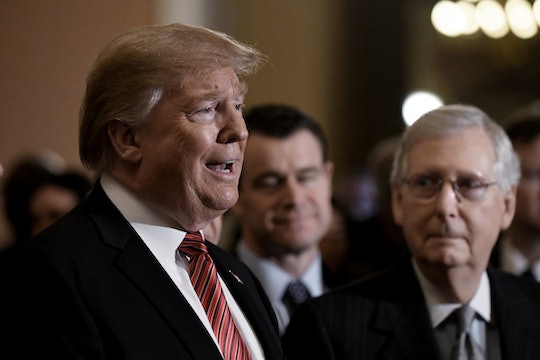 On Dec. 22, 2018, a partial shutdown of the United States government went into effect after Congress and the Trump administration couldn't reach an agreement over funding for a wall on the US-Mexico border, as reported by Al Jazeera. As you might know, Trump and some lawmakers want the money for a wall, while many Democrats vehemently oppose the idea. As time passes, the effects of the shutdown are becoming increasingly visible, and some are pretty alarming.

Due to the shutdown, about 41 percent of the US Food and Drug Administration staff are off the job, CNN reported. In a statement on its website, the FDA noted that operations "continue to the extent permitted by the law" such as "activities necessary to address imminent threats to the safety of human life and activities funded by carryover user fee funds".

Part of the FDA's role includes food surveillance, as noted by the FDA's commissioner Scott Gottlieb on Twitter. But, according to NBC News, Gottlieb is now trying to determine which inspections are most vital, while also looking out for his employees.

During a government shutdown, federal employees do not receive pay, and may be furloughed — or granted temporary leave. That's an issue when it comes to an agency's ability to conduct its usual business.

According to Gottlieb's Twitter, high-risk commodities include: seafood, dairy products (including cheese), unpasteurized juices, both fresh and processed fruits and vegetables, medical foods, and even infant formula.

While companies can still issue their own recalls, that the FDA will share, the federal organization cannot meet the current demand regarding food safety inspections.

The FDA's inspections help keep bad products off our shelves and out of people's homes, so this is clearly concerning — especially to employees.

Cheryl Monroe, a furloughed employee in the Detroit Lab, reportedly told CNN, "If someone calls and says they've had a bad reaction to a drug, we can't analyze it."

The Center for Science in the Public Interest are also concerned about the food supply risk. In a statement, CSPI's Deputy Director of Regulatory Affairs Sarah Sorscher said, "We urge the FDA to publish more information about the impact of the shutdown on the safety of the food supply, including more about which types of inspection, import screening, and enforcement activities are considered "critical" and which have been suspended."

The FDA could bring employees back, but the issue is that they will not be paid. Not every employee can take that financial risk. As Gottlieb told CNN:

When I bring back employees that are not being paid, that means they can't likely be collecting unemployment insurance or looking for a second job. We are acutely aware that we need to be mindful of the burden that could be imposed on the individual, and we are looking for ways to mitigate that burden. There will be people that can't be in that situation.

Nobody can be sure when the government shutdown will end. For now, all that remains clear is that the shutdown is clearly having real effects on the work force. Even for FDA employees who may want to help, not all of them can afford to work without pay.

The government shutdown halting food safety inspections is clearly nothing to scoff at. These inspections help keep the American public both safe and informed about the food they eat. If the shutdown continues for much longer, it is unclear what the FDA will decide to do.