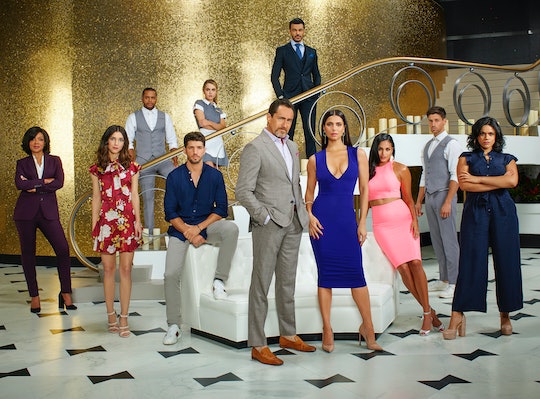 The Mendoza Family Tree Is A Complex One On 'Grand Hotel'

When Grand Hotel premieres on ABC on Jun. 17, viewers will be introduced to the Mendoza family, who have been running the Grand Riviera Hotel for decades. But the hotel workers are just as important to the story, and might know more about their employers than the Mendozas are comfortable with. The Grand Hotel cast is quite a large ensemble, but you'll be getting to know them in no time.

First of all, there's the family at the heart of every scandal. Patriarch Santiago Mendoza is played by Demián Bichir, and he starts off already on the bad side of his kids Alicia (Denyse Tontz) and Javi (Bryan Craig). Their mother Beatriz (executive producer Eva Longoria) was the one who owned the hotel in the first place, but after her death, it has seemingly passed on to her husband. And he might not be doing the best job, since the trailer indicates that he's running out of money fast.

On top of his lack of business acumen, Santiago's personal life is a mess, too. He got remarried to his late wife's best friend Gigi (Roselyn Sanchez), which is bound to cause some tension amongst the rest of the family, including Gigi's daughters Carolina (Feliz Ramirez) and Yoli (Justina Adorno). That may sound complicated enough already, but I haven't even gotten to the staff yet.

Hotel manager Mateo is played by Shalim Ortiz, and he's on hand to give advice to new waiter Danny (Lincoln Younes). From the trailer, it looks like Danny has eyes for Alicia, and no one who's ever watched a soap opera would expect for that to go well. Pregnant maid Ingrid (Anne Winters) makes things more complex, and Time made it clear that everyone has to keep an eye out for Santiago's right-hand woman Mrs. P (Wendy Raquel Robinson). Anyone who goes solely by an initial is someone you don't want to cross.

While Longoria might be the cast's most instantly recognizable face thanks to her Desperate Housewives fame and offscreen activism, there's a chance you've seen quite a few of these performers in other roles. Bichir recently popped up in The Nun, though previously had a regular role on Weeds. Sanchez co-starred for years on Without a Trace and Devious Maids. Craig is a soap opera alumnus, having spent some time in General Hospital. Tontz is fresh off The Fosters and a new adaptation of Less Than Zero.

As for the downstairs crew, Ortiz might be remembered for playing Alejandro Herrera on Heroes once upon a time, though he's racked up plenty of credits since then. Adorno and Ramirez are relative newcomers, having only snagged small parts before Grand Hotel. You might recognize Winters from 13 Reasons Why (she played Chloe), while Younes appeared on classic Australian soap Home and Away.

The Grand Hotel cast has a mix of newcomers and industry veterans. But it's also a very diverse cast. Executive producer Ben Spector told Deadline that the show is about "a Hispanic family achieving the American dream" by being the ones who own and operate the luxurious hotel. Many of the actors might be new to the audience, but after a couple of stays in the Grand Riviera, viewers might find they're starting to know them well.