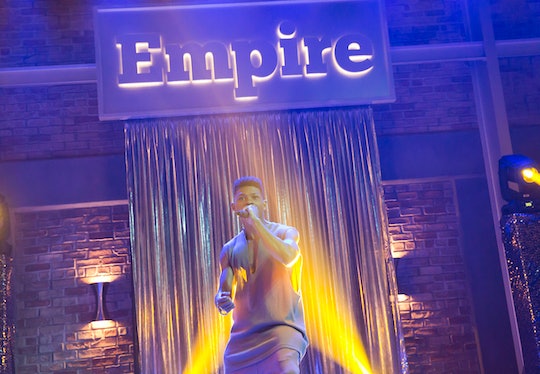 The Hakeem 'Empire' Logo Proves It's The Battle Of The Lyons

After what felt like a never-ending hiatus, FOX's smash hit hip-hop series is officially back and better than ever. It has only been two weeks since Cookie, Lucious, and the whole Lyon gang has returned to our screens, and already they are serving up loads of drama. During Wednesday's episode, I couldn't help but notice that The Empire logo has been changed with Hakeem's face to replace Lucious', clearly proving that the battle of the Lyons is getting more and more heated.

If you need a little refresher as to the events that led up to this major power switch, let's review, shall we? As you may remember, a lot happened during the show's mid-season finale. Camilla, a.k.a., Naomi Campbell, returned to the scene, and along with Hakeem's vote and Mimi's support, Lucious was removed as CEO leaving Hakeem to reign over Empire. Hakeem turning his back on his family definitely came as a surprise, and it was unclear how Hakeem would handle his newfound power. Well, it's safe to say that he plans on ruling Empire with an iron fist.

Changing the company's signature logo was a bold move, marking the significant transfer of power from Lucious to Hakeem. As you might imagine, Lucious and the rest of the Lyon gang didn't quite see this coming, and their surprised reaction was priceless, as were the reactions of the fans.

There is a lot of excitement all around.

People are really digging the change.

Others seem to be in utter shock. How long will it stay like that? I'm thinking that things will figure themselves out before too much gets out of order.