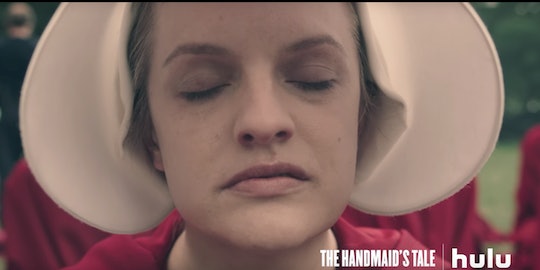 Even if you haven't read Margaret Atwood's novel or started the first three episodes of Hulu's new series, you still immediately connect The Handmaid's Tale with its iconic red robes and white bonnets. This strong association has spurred a Handmaid's Tale clothing line that, perhaps surprisingly, extends far beyond costume. What's more, the looks even have a high-fashion edge to them. So how did this unlikely partnership come to be?

The line, conceptualized by New York fashion label Vaquera, adopts themes from the work of dystopian literature, translating them into clothing. Noting that the collection is "both groundbreaking and timely," Vaquera explained to Refinery29 that "the novel has been an inspiration since the beginning of Vaquera because [of] its use of visual language to discuss poignant social issues." It seems that this marriage has been a long time coming.

Before getting to the cloth and stitching, it's important to know about the tenants of the book that Vaquera is speaking to. Set in an era after the United States has been overthrown, The Handmaid's Tale analyzes the implications of totalitarian government, and how women specifically suffer in its wake. The protagonist of the tale, Offred, is forced into becoming a Handmaiden, so that she must bear children on behalf of a couple of higher ranking. Thus, her red robe and bonnet are a symbol of her class, her gender, and her overall subservient status.

Now back to Vaquera: The label opted to make these class connections apparent in developing their line, sharing that "color is very important to the plot of the show because it is used to categorize people based on their physical bodies." As mentioned, "the Handmaids are dressed in red, which is a color historically associated with violence, oppression, and sex.... We felt so strongly about the use of red in the story that we decided to make a collection of all red looks for this project," Vaquera explained.

Rather than go for a literal re-representation of the Handmaid's garb, Vaquera sticks to color to get the message across. Additionally, bold lettering is used, as you'll see below; "Nolite te bastardes carborundorum," or "Don't let the bastards grind you down," is a quote from the original novel.

Vaquera shared two of their looks on Instagram. The rest will be revealed in a fashion show in June:

As you can see, these first two Handmaid-inspired looks are bold and unapologetic, reclaiming the red that's meant as a tool for shame and reinterpreting it as a mechanism of power. The pieces definitely have an edge to them, going for grit and unevenness as opposed to tailored symmetry. Vaquera's Handmaid collection helps integrate themes from the work into our present reality — giving another set of reminders about the constant need for freedom and free speech.