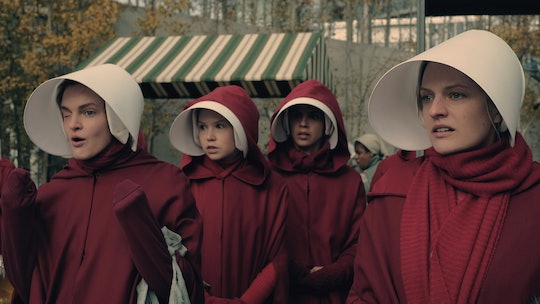 If you were waiting to watch Hulu's new adaptation of Margaret Atwood's The Handmaid's Tale, make haste! This week's Saturday Night Live parody of The Handmaid's Tale should be enough reason to notice that the show is pretty timely and worth getting into. The Handmaid's Tale parody was the perfect extension of some other sketches SNL has done this season, like the perfect "Woman At A Bar" skit in which Cecily Strong fended off well-meaning, but angry "feminist allies." This parody sketch was what happens if things in this country get really, really bad — Handmaid's Tale-style.

The sketch started by copying the show exactly — the women of the SNL cast were the handmaids. They came around a corner and ran into a few men, wearing modern work uniforms who were totally unbothered by anything at all. The men didn't really seem to get how much things had changed, especially for women. They questioned the Handmaids' clothes and dreary attitude. When pressed about whether or not they knew about this whole new "female oppression" thing, Chris Pine — who played one of the clueless guys — vaguely recalled a headline. "Oh, yea, I think I read something about that," he said.

No matter what the women stated, the guys really just didn't seem to understand. Saturday Night Live doesn't always get a sketch right, but when they do, it's worth re-watching. The Handmaid's Tale sketch was another very spot on, smart skit about feminism this season. In addition to the "Woman At A Bar" sketch about fending off "male allies," the "Mansplaining" sketch with Scarlett Johansson last month, mixed right into this week's Handmaid's Tale parody.

More than anything else, though, viewers were into the night's host, who played one of the clueless men in the scene. The actor starred in most of the night's other sketches. The Into the Woods star did a song and dance his opening monologue and continued with the musical theme for the rest of his sketches throughout the night. Although Pine played one of the terrible, ditzy men in The Handmaid's Tale parody, he at least didn't have to break into song and kept the whole thing somewhat amusing. Even though it was a very, very dark joke about where the state of this country could be headed. (Those familiar with the Hulu original series can't deny how culturally relevant the entire storyline feels for our modern-day world, especially when it comes to infringing upon women's rights.)

But if anyone can make an audience laugh about how messed up things might be getting, it's Saturday Night Live.