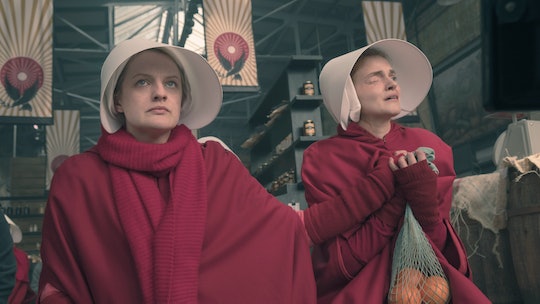 'The Handmaid's Tale' Season 3 Trailer Just Dropped & It Is Terrifying

It's officially the Super Bowl which of course means only one thing: trailers for upcoming movies and TV. I, for one, was especially excited to see the 'Handmaid's Tale' Super Bowl trailer for the upcoming Season 3. Even if it also made me a little terrified for what's going to happen next in dystopian America. I am speaking, of course, of the fictional dystopia on the show — not what's actually happening in America at the moment. Although a lot of that isn't looking so hot at the moment either.

Just a few minutes after the "big game" had gotten started, an ad came on that seemed just like any other social justice-y Super Bowl ad — boasting that "this morning" more women would be going to work than ever before. And then the voiceover started talking about all the babies those women would be having. And then the shot showed someone who looked an awful lot like Serena Joy happily cradling a little child by the window and that's when it hit me. This is the Handmaid's Tale Season 3 trailer and from the looks of things, it is about to get *super* real in Gilead. As in, things are exploding and June (Elisabeth Moss) is ready to fight for real this time.

"It's morning again," the still-pleasant male voiceover voice assures unsuspecting viewers. Until the voice soon turns into one of those creepy, distorted, there's-something-wrong-with-the-TV voices that immediately telegraphs: Danger!

Suddenly Serena Joy is calmly surveying an enormous fire, people appear to be making daring escapes and June may or may not be stabbing herself? After several viewings I still can't be sure. The spot ends with June's voice saying, "Wake up, America. Morning's over," over a shot of hundreds of handmaids standing in front of what appears to be the Washington Monument converted into a cross. And this, well, it kind of struck a chord with some viewers.

I can't say I disagree. This show has always been overtly political and in today's political landscape it seems particularly poignant. The country is currently reckoning with the apparent hate-crime inflicted on Empire actor Jussie Smolett, while the National Center for Transgender Equality claims the Trump administration has worked to erode rights for LGBTQ people, and Vice President Mike Pence' supports conversion therapy, as reported by Rolling Stone. It's not a huge leap to say things are looking a little Gilead-ean.

SPOILERS FOR SEASON 2 AHEAD!

... When viewers last saw June, she had finally managed a desperate escape with her newborn daughter. But when it came time to actually get in the van and drive away, at the last minute she gave her baby to fellow escapee Emily (hi Emily!) and decided to turn back. After all, she couldn't leave her other daughter, Hannah, in that place. A teaser trailer for the new season released ahead of the game showed June wearing what looks like the uniform of a Martha, implying that this was her eventual fate after making it back. Considering I expected her to be executed or at least sent to "the colonies," this seems like the best possible outcome for June. Then again, there's nothing saying she's not still on the run.

There's no official date for the show's return but in case you were wondering — yes, I will be watching. Albeit through my fingers.