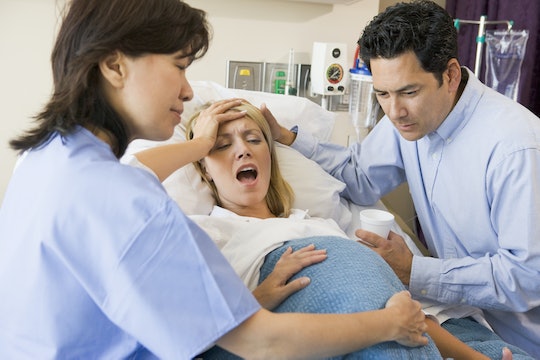 The Ugly Side Of Pitocin To Know About

When you're gearing up to have a baby, it's only natural to wonder about the many factors that could affect your labor experience. For instance, if you need to be induced, then your doctor may use Pitocin to help get your labor going. Although this popular drug has coaxed many babies out into the world, there are also some potentially harmful effects of Pitocin to be aware of.

First, it's helpful to know a little about Pitocin and its uses. According to the Mayo Clinic, Pitocin is the brand name of a synthetic drug used to mimic the effects of the hormone oxytocin. In many cases, it's a great way to induce or augment (speed up) labor, as further noted by the Mayo Clinic.

Although it sounds like a miracle drug (who doesn't want a faster labor?), Pitocin may have potentially harmful side effects for the mother. As noted by RxList, the rare but serious side effects of Pitocin may include excessive bleeding, seizures, breathing problems, and high blood pressure. Keep in mind that these reactions are rare, and even if they do occur, you'll be under a physician's supervision. Still, if the potential for things to go wrong leaves you feeling worried, then review the pros and cons of Pitocin with your physician when you're coming up with a birth plan.

On the other hand, Pitocin may also have potentially harmful side effects for the newborn baby. According to a 2013 study from the American College of Obstetricians and Gynecologists (ACOG), Pitocin use may be correlated to a higher risk for NICU admission for full-term infants, as well as lower Apgar scores. NICU, the neonatal intensive care unit, is often associated with premature babies, but it can also provide care for full-term infants who had a problematic birth process, as well as babies who show potential signs of health issues. Meanwhile, the APGAR test measures a baby's heart rate, breathing, skin appearance, reflexes, and muscle tone, and the score is ranked from 1 to 10. As further explained by the ACOG, infants exposed to Pitocin for labor augmentation also had a tendency to receive APGAR scores of less than 7, whereas scores of 8 and up are considered healthier.

At this time, the full range of side effects from Pitocin are still being studied, and it's important to note that the ACOG does not actively discourage Pitocin's use. That said, it's smart to be informed about your labor plan. Discuss the likelihood of your need for Pitocin in delivery, as well as the potential harmful effects, with your physician for a more in-depth analysis of how the hormone may react to your body. Above all, hopefully you and your baby will have a safe delivery.