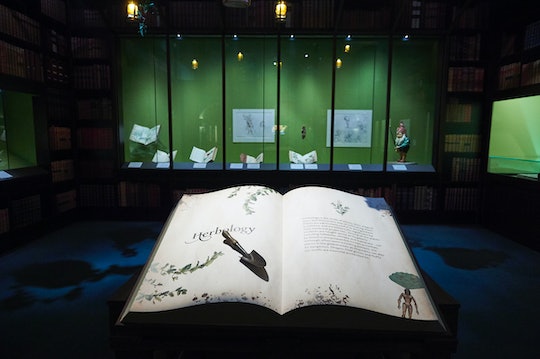 You Can Now Tour The Harry Potter: A History Of Magic Exhibit For Free On Your Couch

You can't get to the Wizarding World right now, and Broadway is dark, but you can now visit many artifacts from the land of Potter from your very own home. The British Library has made the Harry Potter: A History of Magic exhibit free online through Google Arts and Culture, and it's just lovely.

When in doubt, go to the library, said Hermione Granger. In this case, the British Library's exhibition, which began in 2017, features an exploration of the history of magic from across the United Kingdom which includes a witch's scrying mirror from The Museum of Witchcraft and Magic, Harry Potter illustrations from Jim Kay, and the story of how Harry Potter came to be. Forbes reported, "The online collection was highlighted as part #HarryPotterAtHome by the Wizarding World franchise team, promoting ways to enjoy the Harry Potter series at home during the Covid-19 pandemic."

The exhibits are as organized as they would be if they were Hogwarts classes. If you're ready for a bit of light reading, there are Potions, Herbology, Charms, Astronomy, Divination, Defence Against the Dark Arts, Care of Magical Creatures, and Alchemy. You can explore the Ripley Scroll, a stunning, six meter long illuminated manuscript that contains a recipe for the "Philosopher's Stone," which any Potterhead will tell you is "a stone that makes gold and stops you ever dying." Although, I would caution against trying to create one, it never goes well — not even for Flamel.

My favorite portion of the exhibit has to be the magical creatures exhibit. The British Museum has painstakingly digitized and annotated a collection of medieval bestiaries that feature many of the creatures Rowling described in her books, as well as some that will be new to readers. Kids can see the basilisk Harry fought in the Chamber of Secrets, magical unicorns of the Dark Forest, and of course, owls.

It should be noted that J.K. Rowling also opened the licensing for her books, allowing for teachers to read them online to their students. And online at Wizarding World, Harry Potter at Home will be posting craft videos (Philosopher's Stone not included, holding hope for the Draught of Peace), new articles, quizzes, and loads of new content for Potterheads of all ages. On top of that, while you're touring the museum exhibits, you can listen to Harry Potter and The Sorcerer's Stone online through Audible Stories for free.

COVID-19 feels a bit like living with a swarm of Dementors looming over your head, so it's only fitting that we would look to stories of magic that formed our youth to help our own children through these dark times. Perhaps because The British Library made the Harry Potter: a History of Magic exhibit free online, we can all find a bit of joy through entertainment and learning — or at least zone out for a while looking at interesting pictures. That in itself feels like real magic right about now. Until we find this virus' horcrux, at least.