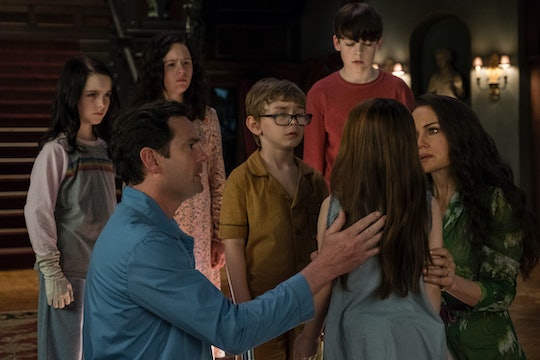 Why We Are Obsessed With 'The Haunting Of Hill House' Now, In This Exact Moment

In 2018 I cannot think of anything that brings us together more than a shared miniseries on Netflix. And, among women with a logon and a lack of FOMO, there is nothing bigger right now than The Haunting Of Hill House — a story in which a mom is somewhat swallowed by the house in which she is raising a whole bundle of kids. It is being discussed everywhere, dissected on Facebook and Twitter, where, for good measure, we can take a “What Ghost From Haunting of Hill House Are You” quiz (full disclosure: the clockwinder). We are terrified, and we cannot get enough. A big part of the reason for that is, at this moment in the progression of humanity, interest in the creator of the original book: Shirley Jackson.

Jackson built her reputation on charming, self-deprecating Erma Bombeck-style humor pieces on raising four children, while also writing genre-bending novels of psychological disintegration occasionally shading into full-scale apocalypse — and what better metaphor for parenthood in 2018? The very real stakes in Jackson’s own life explain why viewers are scared like hell watching the TV adaption, but also unwittingly sad. It is horror, but it humanizes the entire family, and allows a deal of complexity in the links between each member.

Life Among the Savages, her collection of amusing parenting anecdotes originally published in women’s magazines like Redbook and Good Housekeeping, not only chronicles the family fortunes, it also made them. With the money from this unexpected 1952 best-seller, the Jackson Hyman family was able to buy their rambling, untidy Victorian on Main Street, North Bennington. (Her husband Stanley’s salary as a Bennington professor barely kept them in bourbon, though it also provided guests like Ralph Ellison and Howard Nemerov.) And thus began Jackson’s obsession with houses, followed quickly by her virtual imprisonment in one, in the most domestic sense of the word

Shirley Jackson repeatedly remarked that her books predicted actual events in her life, and true to form, the psychic disturbance at the heart of The Haunting of Hill Life presaged a personal crisis. Starting with Hill House running through the uncompleted manuscript she left at her death in 1965, Jackson’s novels all feature female protagonists on the run. In The Haunting of Hill House, Eleanor (or Nell) Vance is on the run from a stultifying relationship caring for her aged, sickly mother. (There are plenty of indications an underlying theme of these escapes was the state of Jackson's marriage with the sarcastic, chronically unfaithful Stanley.)

When I read Shirley Jackson’s biography (Private Demons, by Judy Oppenheimer), what left the biggest impression was her death and the devastation, the lack she left behind. Her youngest, Barry, was 13, and he, along with his three siblings, struggled mightily as Stanley married a pretty young student within the year, and sold off the beloved family home and Shirley’s many collections, including her library of paranormal literature. With little to anchor them, and with the high-flying ‘60s just getting underway, the two youngest, Barry and Sally, turned to drugs. Sally, the child who reminded Shirley most closely of herself, abandoned her artistic pursuits and even spent time in jail on marijuana charges. By Barry’s own account, he lost a decade to heavy drug use, eventually pursuing acupuncture and other holistic treatments as a way to encourage people to care for their own bodies in a way his parents had not. (Stanley himself died five years after Shirley, also of congestive heart failure.)

Netflix’s The Haunting of Hill House retains little of the original plot, beyond some of the names (Nell, Luke, and Theo). But the theme of the mother trapped in the house, and the fates of the children left asking why, both loom large. The series hews pretty closely to some of the themes of her life, particularly that of children devastated and haunted by the inexplicable loss of their mother. (Laurence Jackson Hyman, Shirley’s oldest son, worked as a consultant on the project.)

[Nell], more than anyone else in her family, is literally frozen by the family pathology.

Hill House is repeatedly described by characters as “hungry” to draw the Crain family back in, to gobble them up like a snack, according to the words of father Hugh Crain (Timothy Hutton) But if the house has a favorite food, one it prefers above all else, it is Nell Crain (Victoria Pedretti).

That’s her face in the bottom half of the publicity still, and of all the siblings she is the most closely identified with the house (along with her mother, Olivia, who never escapes it after that fateful night in 1992). Nell is absolutely central in this version of The Haunting, and the 10-hour saga is structured largely around two family rituals with her at the center: her wedding and her funeral. We see a variety of Nells, all shuffled together in the intentionally mixed-up time scheme of the series.

So we see her as a beatific, earnest little girl, glowing at her wedding, and depressed and off her meds, all in rapid sequence. We see Nell strong and confident, and we see her shaking an frozen with anxiety. She, more than anyone else in her family, is literally frozen by the family pathology, just as she suffers sleep paralysis as she is forced to reenact her original trauma in Hill House, night after night. It is in this position that she will see her beloved husband collapse to his death, and not be able to make a move to save him.

If there’s one thing 'the twin thing' reminds us of, it’s that our boundaries are not nearly as defined as we think they are, particularly between family members.

Nell’s segment of the saga is an allegory of the impossibility of escaping family mistakes. Her older sister Theo shouts, “How could she kill herself knowing what suicide does to a family,” saying out loud the “ghost story” that is usually left in vague outline.

The other visible face of the Crain family curse is Nell’s brother, Luke (Oliver Jackson-Cohen). Initially, Luke seems to be beyond reach, lost in his quest for heroin. We never see the steps in his drug addiction, we just see him trying to get a fix in back-alleys. Instead we are dropped into the dep exhaustion of the rest of the family, the disgust at Luke’s years of lying and the stealing and their lack of faith in yet another recovery program. Again and again, we see them look away in disgust and disbelief as he tells them he’s hit 90 days sober.

But we never see Luke do anything truly shady (well, maybe when he makes Nell buy him heroin on the way into rehab). But usually he’s just trying to stay clean, or save the woman in rehab who reminds him of Nell, and nearly dies doing so. If there’s one thing “the twin thing” reminds us of, it’s that our boundaries are not nearly as defined as we think they are, particularly between family members.

Though they aren’t able to stop Nell from being consumed by the house (i.e., destroying herself), the family does manage to intervene to stop Luke from self-destruction. In keeping with the truisms of recovery, they do so by exhuming the family skeletons and running into Hill House in hot pursuit of Luke and his cargo of drugs and many jugs of gas (to burn the house down, presumably). In the series’ climax they all fall into their own drugged stupors, one by one, bound by the spell of Hill House. But they rise to consciousness at different times, attaining enough clarity to commence CPR on Luke.

Only by willingly entering the family psychosis are they able to assist Luke in getting sober. Addiction is a family disease, and, it seems at times, a national one.

Suicide. Depression. Opiate addiction. Is it any wonder The Haunting of Hill House is resonating with viewers in 2018? The supernatural thrills are pretty standard, with skeletons, old-fashioned ladies in wispy dresses, and handicapped children secreted away in attics. The ghostly tropes may be familiar, and not especially jarring, but the series does deliver a sensitive and sympathetic look at the origins of our current dysfunction.

“The past is not dead. It’s not even past,” William Faulkner wrote six years before Shirley Jackson published The Haunting of Hill House. As the ghosts of our own deadly political past resurface, we welcome familiar-looking ghosts — ones who respond to a simple exorcism — in conjunction with psychotherapy and proper medication, and agree to be put to rest.