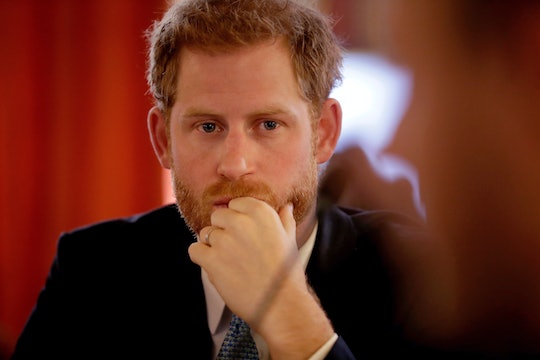 One of the reasons fans love the Duke of Sussex is that he seems to be one of the most relatable of the royals. And that was visible again on Friday when Prince Harry comforted a grieving boy in a way that was touching, heartwarming, and displayed how ready he is for fatherhood when Meghan Markle gives birth later this year.

The Duke and Duchess of Sussex were visiting the charity Empire Fighting Chance, a boxing organization that assists kids, when one young man admitted he was having trouble with the death of his father, according to Town & Country. Iestyn Jones, 15 years old, lost his father seven years ago, as People reported, and became emotional while talking about it. As Cosmopolitan reported, Prince Harry cleared the room to spend a few minutes speaking one-on-one with the boy.

The prince lost his mother, Princess Diana, when he was just 12 years old and has been forthright about how that shaped his life. For example, in an interview with Newsweek, he admitted that in an effort to ignore his grief, he partied too much in his 20s and “was adrift for decades.”

After his chat with the 34-year-old prince, Jones spoke with reporters, as People reported, telling them: "It just got a bit emotional because he mentioned something. He knew some stuff about me and the same thing happened to me. We had a chat for about 10 minutes."

In a group photo later in the visit, Jones said he made sure to stand next to the prince. “They were lovely people. I didn’t expect them to be like that. They were amazing people,” Jones said, according to Hello! Magazine.

This isn’t the first time the prince has taken a moment to comfort a grieving child. In October 2018, for instance, he and Markle were greeting well-wishers along a rope line when he stopped to speak with 6-year-old Otia Nante, according to TODAY. Nante’s grandmother told the prince that the boy looked up to him because he’d lost his mother too.

According to TODAY, Prince Harry took a moment to speak with the child, telling him: “Life will always be all right, you know that. I made it to 34-years-old and life is great." As Marie Claire reported, Prince Harry also pointed out Markle to the boy, and said, “A beautiful wife, a baby on the way. Your life will be sorted, don’t you worry about that.” He then posed for a selfie with Nante.

The charity that Prince Harry and Markle visited on Friday, the Empire Fighting Chance, assists kids that might be heading down the wrong path by teaching them the discipline of boxing, as Town & Country reported. The founders told reporters, as People reported, that they started the charity when they saw two kids dealing drugs outside their boxing club and invited them in; they soon had up to 50 kids coming in.

Now they have up to 350 young people who attend every week to learn non-contact boxing, according to the Daily Mail, and they also provide therapy, and classes on self-control, respect and confidence.

The club, as People reported and Richard Palmer shared on Twitter, presented the prince and Markle with personalized boxing gloves which presumably made Prince Harry quite happy. He’s spoken before about how boxing was one of the things that helped him get his life together when he was struggling, according to News.com.au. “We can spar, we can train. That’s amazing,” Prince Harry told Markle when he saw the gloves, according to Fox News.

Hopefully the couple won't need the gloves anytime soon with a baby on the way. In the meantime, though, the prince is doing a great job practicing his fathering skills in moments like these.