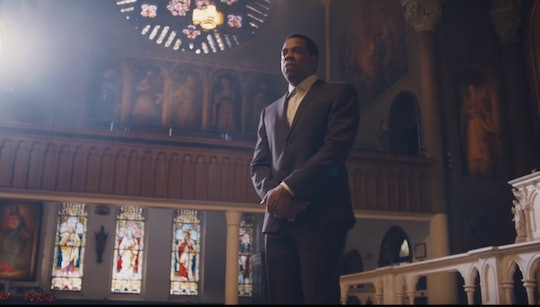 The Hidden Meanings In "Family Feud" That You Probably Missed

JAY-Z's music video for "Family Feud" is a cinematic masterpiece. Shot by Ava Duvernay and featuring some of your favorite actors, "Family Feud" is nothing short of incredible. But with it's lengthy run time, "Family Feud" tells a major story ridden with symbolism, and is definitely one that you have to watch more than once to understand. However, finding the hidden meanings in "Family Feud" shouldn't be too hard, especially with Twitter users helping out.

"Family Feud" predicts what the future will be like, telling the story of how the United States came to be, in reverse. The story ends (but really begins) with JAY-Z, repeating the phrase that will haunt the future of the United States for years to come — "nobody wins when the family feuds." JAY-Z told iHeartRadio, when 4:44 debuted in July, according to Complex, that "Family Feud" was not about his own family or the vision of the future but about all separation. "'Family Feud' is about separation within the culture," JAY-Z said. "Like, new rappers fighting with old rappers, saying all these things."

But the video definitely isn't about rappers fighting, it's about a lot more than that. The video definitely shows a bit of separation of culture — but Twitter users were able to find hidden meanings in the video that you might have missed and that JAY-Z failed to mention.

Women Will Rule The United States

The video flashes back to 2050, where a conference table of women work to rewrite the constitution. That is 32 years from now — and a year that many millennials will live to see (I will be 56 then). If I live in a future where women are at the helm, then I am looking forward to it. Women are the future, they do have power, and the "Family Feud" video makes this very clear. In the words of JAY-Z's wife and "Family Feud" star, Beyoncé, "Who run the world? Girls."

The Future Depends On Us

Needless to say, the United States is pretty divided right now between Democrats and Republicans. In JAY-Z's future, the United States is united through "founding mothers" who work together to rewrite the constitution. This is a future is perfectly attainable if politicians and leaders work together to work towards an America that they want and can believe in. As one Twitter user, FearlessOne37, wrote, "we refuse to feud to make America great again." If people refuse to fight and instead work together, then something can happen. This vision depends on everyone.

Freedom Is Something To Fight For

As the future leader of America in 2050 (aka older Blue Ivy) states in the video, "America is a family and the whole family should be free." The music video for "Family Feud" shows that freedom is something to fight for — and fighting is a heavy motif throughout the video.

In the beginning of the video, in 2444, a future face of America fights her brother and lover to become the face of the family. "We have worked and fought side by side for generations," Madame President says in the video. "We are all related." The video then flashes back to 2096, where Mr. President's family is seen fighting for the law in primitive clothing.

The bottom line? While nobody wins when the family is fighting, having freedom and rights is something worth fighting for. Now that is a vision that people can get behind.