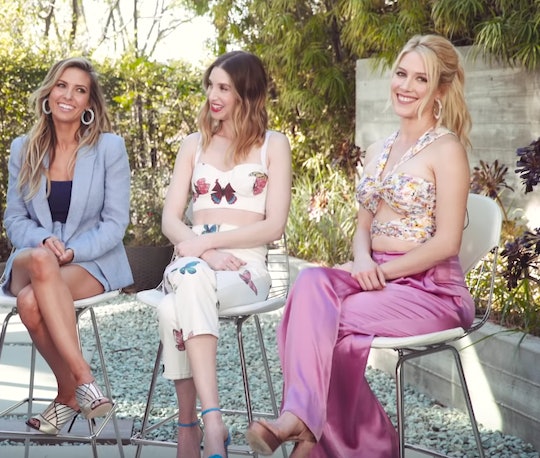 When MTV's The Hills first aired in 2006, the stars of the show were just trying to find their footing through adulthood. But now, a lot has changed — they've become parents and grown up so much after the show went off air. Since the cast has remained close, it's sweet to hear that The Hills costars are always sharing parenting advice, according to Whitney Port. Fans have watched them go from sharing advice on relationships to advice on parenting their little kids and that is so much fun to hear about.

More than 10 years ago, people watched Lauren Conrad and her friends juggle their relationships, internships, and friendships while living in Los Angeles, California. And now they'll get to do that again (sans Conrad) when The Hills: New Beginnings airs on MTV next month, according to The Hollywood Reporter. But, instead of dishing about their internships and relationships, fans will get to see the stars of the show talk about their careers and their kids when the show airs.

The stars of the show are already doing this offscreen, too. In a new interview with Us Weekly, Port revealed that she, along with her fellow cast members, are "constantly" sharing parenting advice, especially since their kids are close in age.

"Audrina [Patridge's] is a little bit older [but] Heidi [Pratt] and Ashley [Wahler's] and mine are around the same age, so we're talking about sleep schedules and weaning off of things and walking," she said.

Unlike their drama filled days of the past, Port told Us Weekly that they're not comparing their kids or their progress (smart) but instead using each other as people to go to when parenting becomes a little overwhelming. "We're always, like, not comparing, but being able to vent to each other and support each other."

The best thing that moms can do for each other is be there and support one another. So, it's awesome that the stars of The Hills: New Beginnings have been able to do that for one another — especially since, like Port said, their children are pretty close in age. Patridge was the first of the cast members to start a family, giving birth to her daughter, Kirra, in June 2016. But, 2017 was a huge year for the rest of the cast. Port welcomed her 1-year-old son, Sonny, in July 2017. In August 2017, The Hills star Jason Wahler and his wife, Ashley, welcomed their 1-year-old daughter, Delilah Ray, into the world, according to E! News. And just a few months later, Heidi and Spencer Pratt welcomed their 1-year-old son, Gunner, into the world in October 2017, according to People.

That's a lot of one year olds to keep track of. But, fans of The Hills might not get to see a lot of their little ones on screen in the new reboot — Port told Us Weekly that they "didn't film with the kids very much" and that their little ones "haven't really hung out yet" in spite of the parents filming together.

The good thing is, people don't have to tune in to the show to see their super adorable kids. Both Heidi and Spencer are constantly sharing the cutest videos of Gunner on their Snapchat accounts, according to E! News. Port's YouTube series, "I Love My Baby But..." documents her life as a mom to a 1-year-old and brings attention to all of the best (and worst) things about motherhood, according to Glamour. And Patridge is always sharing the most adorable photos of Kirra to her Instagram account.

Although fans won't get to see too much of their kids on screen, hopefully cameras were able to catch the stars talking about parenting with each other. It sounds like they had a lot of interesting things to say about their kids that people would love to hear.