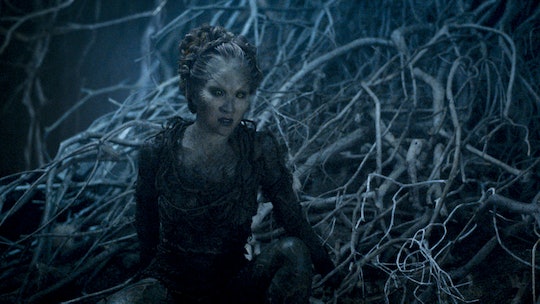 In "The Spoils of War," Jon Snow gave Daenerys Targaryen a Westerosi history lesson thanks to some convenient cave paintings that illustrated exactly what he was trying to tell her: that White Walkers were a major threat. But the icy dead beyond the Wall aren't the only mystical beings that have had an effect on the seven kingdoms. In fact, their creation was due to the Children of the Forest, who lived in Westeros before men arrived. Taking a look at the history of the Children of the Forest on Game of Thrones can shed some light on how the country became what it is now.

The Children of the Forest were the native inhabitants of Westeros, living there long before the First Men made the journey over from Essos. Their name came from their penchant for living in the woods (which covered Westeros before men arrived to deforest the land) and the fact that their appearance was relatively childlike. But despite the fact that they looked like kids, they were an old and wise race that possessed an incredible amount of power. It seemed like they lived a relatively idyllic existence until their lives were disrupted by the First Men. After that, everything changed.

The Children of the Forest and the First Men fought over the land for centuries. While the men had the numbers and weapons to decimate the Children's lands and lives, the Children still had magic. They were able to break the land bridge the First Men had initially crossed to get into Westeros so that no more could follow. They also flooded the Neck to prevent the men from spreading to the north, which unfortunately did not succeed. The two groups eventually signed a peace treaty, but despite that things were not entirely peaceful going forward.

Though there were supposedly 4,000 years without conflict following the treaty, there was a hitch. The Children must not have been entirely assured that the First Men would not turn on them again, because they plunged obsidian into the heart of one man and thus created the White Walkers: an army of dead men intended to drive the living ones out of the Children's homeland. Instead, the Children ended up joining forces with the First Men to defeat the White Walkers, which had expanded out of the Children's control.

As the centuries passed, the Children were further ousted from the land that had once been theirs. Another group of men called the Andals arrived and battled with the First Men, with both eventually intermingling and creating the Westeros fans see today on the show. The Children were pushed deeper and deeper into their forests until they became mere figures of legend whom few believed in. Some survived beyond the Wall where they helped the Three-Eyed Raven, but the last of their numbers were destroyed in Season 6 when White Walkers attacked.

Westeros belonged to the Children of the Forest until it was taken from them, and now none of them remain. The Children are truly extinct.