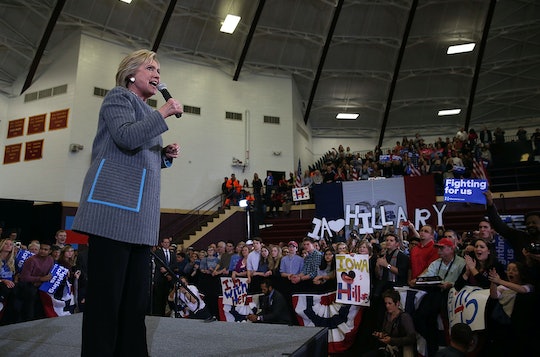 By now, voters have seen just about every candidate for president — Republican and Democrat alike — slog their way through the snow, stepping off on rock star, bedazzled tour buses at taverns, diners, and community centers to court Iowa voters to “caucus” for them in this year’s race. So why is it such a big deal? You have to look at the history of the Iowa Caucuses to really understand.

Iowa has always used the caucus system rather than primary voting, except for one failed experiment with a traditional primary in 1916 according to TIME. But they were usually low turnout, sleepy affairs that rarely caught the attention of the national press, much less any of the candidates.

That all changed after the 1968 Democratic Convention in Chicago, when as The Smithsonian described, protesters against the Vietnam War raged outside the hall, inside the hall Democratic bosses, those proverbial men who gather in those proverbial dark smoke-filled rooms, picked former President Lyndon B. Johnson’s vice president, Hubert H. Humphrey as the party’s nominee, despite the fact he hadn’t competed in a single primary race, and there was considerable support -- and actual votes -- behind Eugene McCarthy and George McGovern. All hell broke loose inside the convention, complete with cops storming in with tear gas, putting the entire American democratic process into question.

And so the Democrats vowed to reform the process, making more room for the voices of everyday voters and grassroots activists and shoring up support for a primary system based on votes, rather than the whims of a few high-powered party elites. Part of the package of reforms was moving the Iowa caucuses to the front of the election season, making it a critical bellwether for future primary races. In 1976, the Republicans moved their own caucuses to the same night as the Democrats making Iowa the first real test for any candidate, and a big hairy deal in American presidential politics.

Not only did making Iowa the first contest of the election season draw the attention of the candidates, but it gave the national press a huge news story to watch. Iowa was the first test, not just of each candidate's’ viability, but the first real measure of the mood of American voters heading into the elections. As a result, every four years the nation’s attention turns to Iowa to watch what “Iowa Nice” voters, as they’re often called, are thinking and feeling about the country and its field of would-be leaders.

But winning the Iowa caucus is hardly a sure-bet that candidates will go on to their party’s nomination and ultimately take the White House. Iowa voters have only selected the eventual president three times — in 1976 the Dems picked Jimmy Carter, in 2000, the Republicans picked George W. Bush and in 2008 the Dems voted for Barack Obama. Some critics say as the national electorate gets more diverse, Iowa, as its own Iowa Caucus Project reported — with its more than 90 percent white population and nearly a quarter of caucus voters identifying as Evangelical — is falling farther out of step with the rest of the country. The evidence of this shift is that in 2008, Iowa Republicans selected former Governor Mike Huckabee and in 2012 picked former Senator Rick Santorum, two candidates who run hard on Christian values but never gained traction in the rest of the state primary races.

But, nonetheless, winning the Iowa caucus can mean a big momentum boost for candidates — both in terms of fundraising and media attention — which is why the candidates go all-in to try and reach as many Iowa voters as possible to earn their support, crisscrossing the state to kiss babies, shake hands, chow down on mountains of pork tenderloin sammiches, and convince voters they are the right candidate to fight for the issues voters care most about. In fact, NBC News reported that the candidates have spent a mind boggling $70 million on political ads in Iowa to sway voters.

And now all we can do is wait and see how that investment in time, money, and sweat will pay off for candidates as Iowans give Americans the first glimpse of how the presidential race might look in 2016.

Here’s a video from Iowa Public Television that tells a bit more of the Iowa caucus story.