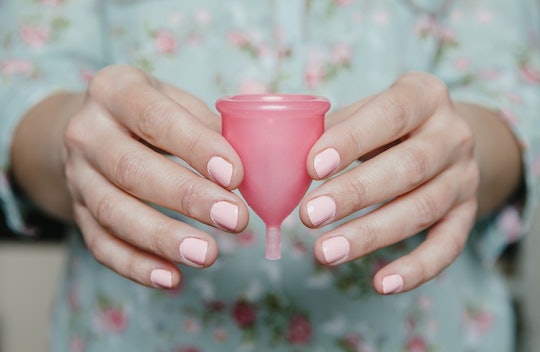 The History Of The Menstrual Cup, The Not-So-New Feminine Hygiene Product

Of all the menstrual devices available to women, menstrual cups may feel like the most modern solution. The flexible cups, often made from medical-grade silicone, are a reusable and eco-friendly way to deal with Aunt Flo. Certainly women from previous generations would not opt for a solution that required so much hands-on exposure to the body? As it turns out, the history of the menstrual cup is more interesting — and long-running — than you might imagine. Even decades before women could legally vote in the United States, some ladies were rocking menstrual cups to handle that time of the month.

Although these devices feel totally modern, some women who endured the Great Depression had access to cups that were more or less the same as the ones available today. It turns out prior generations of women were also happy to think outside the box for period management. (This is not surprising: have you seen the monstrosities that used the be pads? They used to involve belts. Belted menstrual pads. Let’s take a moment to appreciate the wonders of self-adhesion.) Overall, the most modern-seeming method of menstrual containment actually has over a century of history. Here’s a look at the many incarnations of the cup throughout history.

Can you imagine trying to cope with a period while wearing a hoop skirt? It makes you grateful that yoga pants are now considered acceptable. At any rate, The United States Patent Office notes that the first known menstrual cup was patented by Hiram G. Farr in 1884. While the invention as a whole looks a little terrifying, doesn't part a look pretty similar to modern menstrual cups? According to the patent, "a solid cup-shaped top, a, which supports and receives the discharge from the uterus" is the only part inserted into the vagina. This sounds a lot like any cup you could order from Amazon today.

As the Museum of Menstruation noted, the first commercial menstrual cup was patented by Leona Chalmers in the late 1930s. After dealing with rubber shortages from World War II, the production of this first cup, called the Tassette, cranked up in the 1950s. It looks very much like modern cups, with and an advertisement from the time details the same benefits: "You yourself will find the Tass-ette so comfortable you will forget you are using it; so safe and secure you need not give it a thought. You save money, too!" The same language was used in a 2015 Slate article from Jane C. Hu: "No, you can't feel it once it's in" and it "saves you money." It looks like Chalmers was an inventor and businesswoman who was way ahead of her time. But unfortunately sales did not keep up, and the Tassette ceased production the 1960s, according to the Lunette site.

Various companies kept making menstrual cups, but they were never really mainstream. Some, however, did survive. The Keeper, which has been "manufacturing menstrual cups since 1987," was one such entry, and the brand is still available today. It is made from natural gum rubber and may last up to 10 years.

Now cups are available in many brands, sizes, and even colors. They can be made from silicone or other flexible materials. But even the most modern-looking one owes its existence to these inventive, forward-thinking menstrual cups from the past.