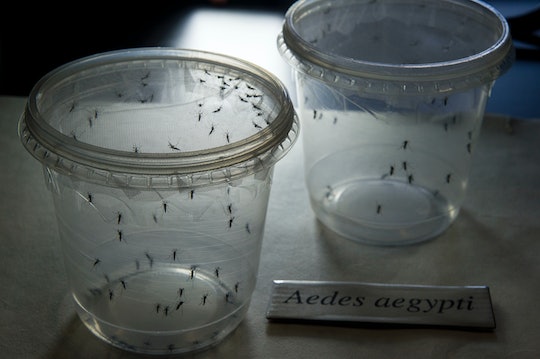 By now, most pregnant women have probably heard of the Zika virus. But what's the history of the Zika virus, and what can pregnant women do to protect themselves from it? Women who are pregnant or who plan on becoming pregnant in the near future need to know a few critical pieces of information about the virus that has spread across parts of South America.

On Tuesday, CNN reported that a newborn in Hawaii was found to have microcephaly believed to be caused by a Zika virus infection. According to CNN's Ben Brumfield, it may "be the first one reported in the United States linking the birth defect with the virus." This is a big deal because, until now, the U.S. appeared to be at limited risk of seeing the impact of the virus. It isn't definitive that Zika causes birth defects, but there's a high enough correlation for doctors to be concerned.

Zika may be exploding in the South America now, but it's had a long history. According to The Atlantic, Zika virus was originally discovered in 1947 in Uganda, deriving its name from the Zika forest. In the decades following, it has made its way to "other African countries, Southeast Asia, the Pacific Islands, and South America." Right now, it appears as though the biggest outbreak (in the Americas, at least) is in Brazil. The country didn't have any known instances of Zika until May 2014; since then, it has seen the number of microcephaly cases increase by a multiple of 20.

According to NPR, that's about 3,500 microcephaly cases in Brazil between 2014 and 2015. NPR interviewed the mom of a baby with microcephaly who had Zika while pregnant. Her son, Arthur, deals with the physical and psychological impact of the birth defect daily. But because Zika is spread by mosquitos, she feels the government's failure to control a dengue epidemic set the stage for another mosquito-borne illness that the country's medical infrastructure isn't prepared to handle, according to NPR:

It's as if they see us as a lost cause. The government's attitude seems to be, 'They have been contaminated, so let's focus on the ones that haven't been damaged yet.' And it's not just the kids, it's the whole family who is affected when something like this happens. It's just devastating.

Since the Zika outbreak began, Brazil mobilized its army to help control mosquito populations while destroying breeding grounds and funding vaccine research, according to NPR. The country's efforts haven't prevented several cases of the virus from appearing in the United States. According to a Wednesday report from U.S. News & World Report, there are multiple confirmed cases of Zika in the United States: three in Florida, two in Illinois. There was also cases reported in Texas and Puerto Rico in addition to the one in Hawaii.

According to the Centers for Disease Control and Prevention, Zika virus symptoms include "fever, rash, joint pain, or conjunctivitis (red eyes)," with some experiencing headaches and muscle pain. Because Zika can present in ways similar to chikungunya and dengue, it's important for anyone experiencing symptoms to seek medical attention and get tested. Unfortunately, many individuals may not even know they've got Zika: only about one in five become ill, making it difficult to diagnose the virus by symptoms alone. In a health advisory released Friday, the CDC recommended that people pay particular attention to symptoms if they've traveled within two weeks to a country in which there is known transmission of Zika. Though they're working to determine the link, if any, between Zika and microcephaly, CDC officials also offered prevention guidelines for pregnant women:

According to U.S. News & World Report, the CDC alert level for travel applies to "Brazil, Colombia, El Salvador, French Guiana, Guatemala, Haiti, Honduras, Martinique, Mexico, Panama, Paraguay, Suriname, Venezuela, and Puerto Rico." Again, Zika is not linked directly to birth defects; more work needs to be done to determine whether causation exists. But pregnant women and those planning to become pregnant may want to avoid a vacation or business trip to any of the listed countries until the CDC gives the go-ahead.