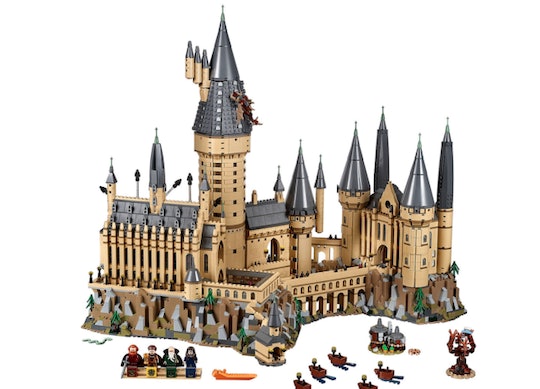 OMG, You Will Not *Believe* The Detail In This 6,000-Piece Hogwarts LEGO Castle

I am a complete raging Potterhead (House Ravenclaw, thank you very much) and I have successfully raised another Potterhead, molding him in my likeness of all things Hogwarts. (Another Ravenclaw.) We have so much Harry Potter stuff — from my prized possession first edition Harry Potter and The Philosopher's Stone, all the way down to keychains of our house necktie. Needless to say, the new Hogwarts LEGO Castle will find its way into our home even if I have to chase an angry animagus in their shifted form to do so. I'm dedicated, y'all.

Thankfully, I don't think that will be the case, as LEGO is making this ginormous 6,000 piece set available to its VIP members (which obviously stands for Very Important Potterheads) on Aug. 15, and to the general population on Sept. 1. This set will put a dent in your account at Gringotts though, with a price set at muggle American $399.99, or roughly 83 Galleons, 2 Sickles, and 23 Knuts. But it's so worth it. The new Hogwarts LEGO Castle set is more detailed than any set before it, including the Millenium Falcon, and it's also one of the largest. It's got everything from a room full of enchanted, flying keys to a little Lego mirror of Erised. There's no part of the Hogwarts lore that goes untouched in this masterful set.

But what does a LEGO character see when they look in the Mirror of Erised? I'm guessing a life with thumbs. Or one where the mistress of the pieces doesn't rotate your head so you're looking at your butt.

It also comes with an astonishing 27 microfigures. According to LEGO, that includes Harry Potter, Ron Weasley, Hermione Granger, Draco Malfoy, Albus Dumbledore, Professor Snape, Professor McGonagall, Remus Lupin, Professor Dolores Umbridge, Argus Filch, Lord Voldemort, Bellatrix Lestrange, plus three students from each of the four houses, two chess pieces, the Architect of Hogwarts statue, five Dementors, plus Aragog the spider, the Basilisk figures, and a buildable Hungarian Horntail dragon. Say that all in one breath — or in parseltongue if you are so gifted. But if you do that, none of your friends will trust you. (Unless you're a Slytherin, in which case, carry on. Business as usual.)

I did notice one clear oversight in this set. It comes with Hagrid's hut, Aragog, and a dragon, but no Hagrid. I get that designing a giant would be tricky, but how can you have this new Hogwarts LEGO castle, complete with Hagrid's hut, but no bloody Hagrid? I mean, come on. This is a huge disappointment to all of us Hagrid fangirls. (Which is essentially everyone who has ever read the series or even watched the films.) Hagrid is Hogwarts.

I will say that adding in the dementors and Umbridge are a nice touch, because you can't play Hogwarts if you don't have evils like those lounging about in the shadows. And yes, they have He-Who-Shall-Not-Be-Named, but he's more of a puppet master. He has the dregs of magical society like Bellatrix to do all the worst work. (And thank the heavens we live in a fictional world that has moms like Molly Weasley in it to fight back.)

There are also Horcruxes included, like Tom Riddle's diary. It's a darn good thing that Ginny Weasley isn't one of the microfigures because we all know how hairy a situation that could become. Alas, all is safe thanks to the Basilisk included, as Harry knows what he needs to do if that diary starts acting afoul and getting lively.

These sets are going to sell out faster than you can throw an Arresto Momentum at other witches and wizards trying to get their hands on the castle. So do yourself a favor — sign up for the VIP club and get in early.