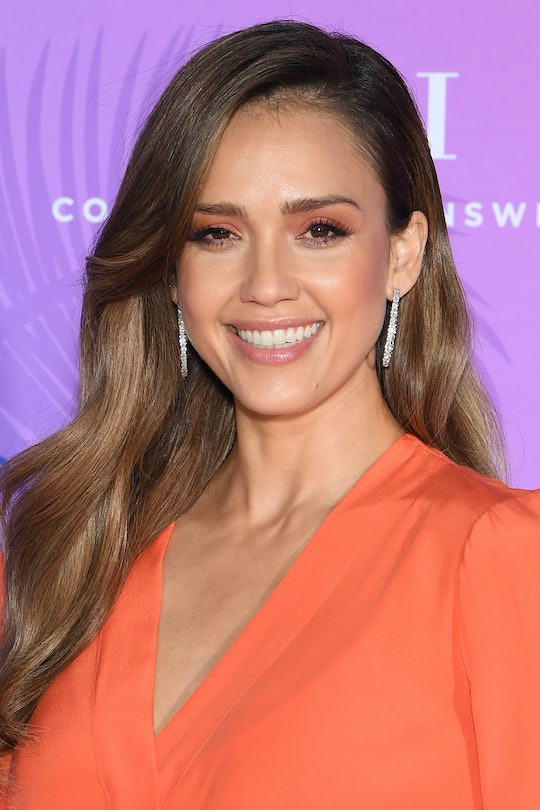 Jessica Alba Knows Work-Life Balance For Parents Is A Lie, So She’s Redefining It

I'm sinking into a plush couch in a penthouse suite of an expensive-smelling hotel in Manhattan's Flatiron district, sitting directly across from Jessica Alba, founder of the Honest company and mom of three. Wearing a thigh-high slit kimono dress and tan flip flops, Alba looks painstakingly effortless for a woman responsible for three children — Honor, 11, Haven, 7, and Hayes, 1 — and a company that at one point was valued at $1.7 billion dollars.

Meanwhile, I'm wearing a pair of ripped black jeans I can't guarantee are clean, a dark grey tank, and equally dark circles under my eyes. My maternity leave ended five months ago, and since then I've been trying desperately to maintain the same work load I had pre-baby number two. If the coffee stain and lingering smell of a shirt that was washed but definitely not folded and simply grabbed from the pile at the bottom of my bed is any indication, I'm failing miserably.

Alba's perceived effortlessness has become an affront to the illusion that I am the same working mom I was before my second son was born.

But then Alba says something that catches me off-guard: an admission that, while obvious, is rarely said out loud, in earnest, and in the context of working motherhood — especially by someone who has to maintain a certain public image.

"You are a different person when you come back [to work] after having a child," she says. "If that is a life choice somebody makes, they should be able to do it with dignity and without being compromised."

Forty-seven percent of the 74.6 million women in the U.S. labor force are moms, according to a 2017 report from the U.S. Department of Labor. Seventy percent of moms with children under 18 work outside the home, and for 40% of U.S. households, it's a mom who is the primary earner. Yet most U.S. companies fail to accommodate the needs of working moms — who are still doing the majority of the childrearing and household chores, according to the Pew Research Center — or even acknowledging that working moms need a different kind of support than their kid-free counterparts. The U.S. is the only industrialized nation without mandatory paid family leave, a reported 25% of new moms return to work a mere two weeks after giving birth, and a mom makes only 71 cents for every dollar a dad makes.

As a result, many of us U.S. moms are searching for that elusive "work-life balance." And it's easy, sitting across from Alba's shiny blowout and seemingly well-rested pores, to assume she has obtained it.

You don’t need to separate yourself from the woman that you are once you become a mom.

"I don’t think there is a balance, and I think we shouldn’t be held up to any expectation that we should have balance," Alba tells me. "I don’t ask my business partners, 'Hey, you’re a working dad: how do you balance it all? How do you balance being a CEO and being the father of two sets of twins?' My CEO never gets that question."

According to Alba, the more us moms believe in the expectation of "balance," the more we set ourselves up for failure. "It forces us to feel like we're inadequate in some way when we can't reach that balance," she says. "So I just try to give people — whether they're a man or a woman and they decide to have a family — as much support as possible so they can still dream and have career aspirations and also have some respect for their personal time."

This balance-free philosophy ("I feel like I'm always compromising something and I don't feel like I'm doing everything 100%," Alba tells me.) has permeated into The Honest Company. For Alba, it's not about separating motherhood from your work life or your social life or your romantic life or any other aspect of your life, but, rather, to find a way for them all to co-exist and work in harmony.

It's just — how do you make something a little more joyful? That’s really what it’s about.

(I am wearing a pink lip, blush, and a cat eye. Did Alba and I just become best friends?!)

"Of course I can still care about that, and take that time!" she continues. "I love to pamper myself because, why not? We should. You don’t need to separate yourself from the woman that you are once you become a mom."

It is at this moment that I am beginning to feel sheepish, or, at the very least, guilty for falling into the all-too-easy trap of looking at a beautiful celebrity mom and feeling wholly inadequate. (At one point, Alba grabs some some cheese off a table and says, "Do you ever just find yourself eating crap you wouldn't normally eat because you're so tired?! I am so tired. I never eat cheese." I immediately try not to think about the inordinate amount of cheese I have consumed in the eight months since my child was born.)

Yes, Alba has a team of well-qualified people and professionals that help her manage her many responsibilities, including but certainly not limited to running a company, caring for three children, and starring in a new show, L.A.'s Finest. Yes, she has people surrounding her whose entire job is to make sure she looks effortless in kimonos with thigh-high slits. Yes, I would probably feel better about my abilities as a working mom of two if I was privy to the same level of hired help.

But it's also clear that Alba has found a level of peace in the knowledge that the so-called "work-life" balance is a lie designed to make us all feel bad. And that peace — that "life is messy but also beautiful" attitude — has helped her create a company culture (70% of the leadership at The Honest Company is comprised of women, and the company has a 4-month paid maternity leave and 2-month paid paternity leave policy), and line of natural products for both babies and parents, that celebrate an undeniable truth of motherhood: it does change you, it's impossible for that change to not seep into every other aspect of your life, and that's OK.

"That's why I put designs on the diapers because, by the way, babies don’t care," Alba says, smiling. "You’re the one changing that butt seven to 10 times a day, depending on the day. It's just — how do you make something a little more joyful? That’s really what it’s about."