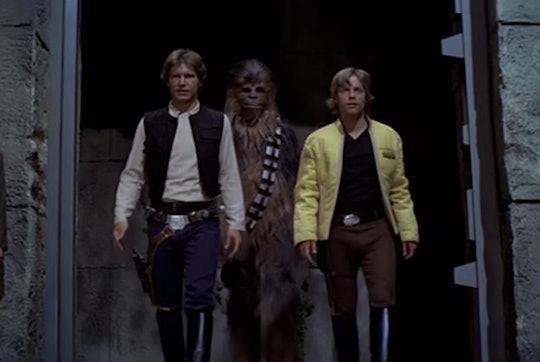 The Honest Trailer For 'Star Wars' Is Out, & It's Perfect – VIDEO

As if this weekend wasn’t steeped enough in all things Star Wars already (you do know that The Force Awakens opened Thursday night, right?), the folks from Honest Trailers came out with an honest trailer for the original Star Wars movie. If you haven’t seen it yet, please do yourself a favor and take four minutes right now to do so because, as you would expect, it’s completely brilliant.

The original has been ripe for an honest trailer basically since there have been honest trailers. I mean, when a movie takes on legendary status the way Star Wars has, complete with an entire universe of spin-off stories, shows, games, fan-lore, cosplay and I can’t even wrap my head around all the other things, it's just waiting to be skewered a little bit with some good-natured comedy.

Nothing is sacred in this honest trailer, and that’s what I love about it. It points out hilarious and bizarre inconsistencies between the first trilogy (I mean the second trilogy, but also the original trilogy) and the second, I mean the first, wait... you know what I mean, right? There are honestly so many spectacular jabs in this video that I have to break it down for you. Here are the honest trailer's best moments:

"From the once-masterful director who just couldn't leave well enough alone..." I think that pretty much sums up every Star Wars fan's feelings about the second trilogy, wouldn't you?

Like when they point out that Obi Wan, a wise Jedi Master, doesn't remember a droid that saved his life multiple times in the past. Ummm, okay.

Let's not forget this golden moment.

What If They Were Supposed To Be Annoying?

And, oh my God, Lucas might have intentionally made these two bratty and whiny? MIND. BLOWN.

Someone Finally Said It

The "army of clumsy idiots" in full effect.

Honestly, I could pretty much show you each and every frame in this trailer, because of how perfect it is, but I'll just let you watch the whole thing now: