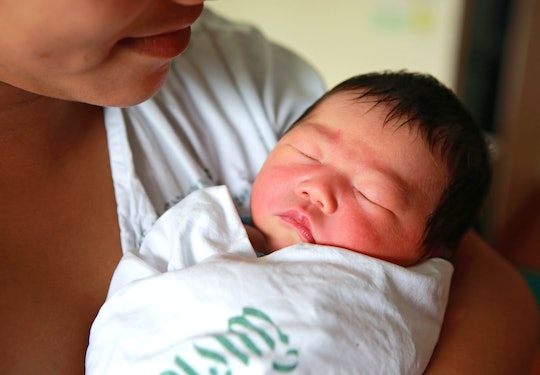 As a parent, you’d do anything to make the world safer for your baby. As a country, it’s the same. Between 1994 and 1999, SIDS incidents in the U.S. dropped by 35 percent thanks to a concerted effort to push the “Back to Sleep” initiative. Almost overnight, we changed the way we put our babies to sleep. Gone were the crib bumpers! Gone, the loose bedding! Sleep may have gotten shabbier, but true to the promise, SIDS rates went way down. Today, our infant mortality rate sits at 532 per 100,000 births, ranking the U.S. 26th among the top 35 developed countries, per the Centers for Disease Control (CDC), and a study published on March 20 by PLoS Medicine found that full-term infants in the U.S. are up to 200 percent more likely to die than babies in comparable developed countries. Maternal mortality is an average of about 26 deaths per 100,000 births, the worst in the developed world. Between infant and maternal mortality, which one do you think we are more worried about?

For many years, we’ve been more focused improving the infant mortality rate, particularly for an “easy fix” like reducing SIDS and unintentional injuries (suffocation, drowning, and car accidents). That’s why overall infant mortality had improved by 15 percent between 2005 and 2014. Just last week, California announced the launch of its “Baby Box” program, modeled after Finland’s initiative, which will provide free baby supplies to pregnant women starting on March 7, and educate parents on preventing SIDS. Still, we can do more for the babies if we focus on the mothers. Healthier mothers means fewer infant deaths.

Last year a well-researched series of articles published by ProPublica and NPR, "Lost Mothers," examined the U.S. maternal health crisis and, amid fresh pressure to do something, the CDC, along with various cities and states, created around 30 new maternal mortality review committees (MMRCs) to look at the leading medical causes of maternal death. The latest report found that 58.9 percent of maternal deaths were preventable. That’s means roughly 400-500 women a year should not be dying in childbirth. For a nation that spends 17.5 percent of its GDP on healthcare, such poor outcomes for mothers and infants point to system-wide waste.

So, why haven’t we pulled all our resources for ways to reduce the vast number of preventable maternal deaths the same way we’re tackling SIDS or teaching parents to better install car seats to prevent accidental deaths? Where is the New-Mom Box to save the nation’s women?

Between 2005 and 2011, the only cause of infant death that saw an increase was “accidental suffocation,” increasing from 26.2 to 27.5 deaths per 100,000 per the CDC. (That’s an additional 40 deaths per year nationally.) The reason for this rise? Dr. Harvey Karp suggested in USA Today that parental exhaustion was partly to blame for infant sleep deaths:

The terrible, unintended consequence of the Back to Sleep campaign is that it has worsened infant sleep. Babies just don't sleep well on their backs in still, quiet cribs. And as discussed in myth 5, when babies don't sleep well, parents resort to bed-sharing, which leads to many more infant suffocation deaths.

Karp is saying that in cases of bed-sharing, the incredible public awareness campaign around safe sleep is failing us. The burden of reducing infant deaths has been placed on parents, who then find their sleep disrupted, and put their babies at risk as a result. This is borne out by the PLOS study, which noted a "high risk of sudden unexpected deaths in infancy, which should largely be preventable through appropriate sleeping arrangements."

And so it all comes back to the parent, who we already know is not being looked after.

It's not simply a clinical or research question. It's a social justice question, if you will, for our nation.

If a mother has had all her vaccines, is taking folic acid, her vitals are being monitored and any problems are diagnosed in time, she is more likely to have a healthy infant. An infant’s chance of survival increases when its mother receives better care before and during pregnancy, and then has regular support once she and the baby return home. So: are all pregnant women getting the same level of care and education? Unsurprisingly, the answer is no.

As Dr. Paul Jarris, chief medical officer for the March of Dimes told CNN, "We really can't separate out infant mortality from the conditions in which people live in this country. It's not simply a clinical or research question. It's a social justice question, if you will, for our nation."

Over the past 80 years, maternal deaths have dropped dramatically, thanks to medical advances, including, yes, those scalpel-happy c-sections. However, after steadily creeping up since the 1980s, maternal mortality is now the sixth-most-common cause of death among U.S. women age 25 years to 34 years old — usually peak pregnancy years. And for African-American women, maternal mortality is actually 44 per 100,000 births versus 13 for white women, more than three times as high.

Not only are African-American mothers more likely to live in poor or rural areas, but they have higher rates of chronic disease and prolonged stress. In a 2017 article on New Jersey’s high infant mortality, reporter Lindy Washburn wrote that the stress of discrimination, which affects African-American women across housing, employment, education, and the likelihood of incarceration, and colors personal interactions, takes an actual physiological toll on their cells. "Cells age more quickly. [Researchers have] used the term ‘weathering,’ and have suggested that the effects may be felt particularly by African-American women," she wrote.

A 2016 analysis of five years of data found that black college-educated mothers who gave birth in local [New York City] hospitals were more likely to suffer severe complications of pregnancy or childbirth than white women who never graduated from high school.

What is different about growing up black in America is discrimination. So even when an African-American mother is well-educated and lives in an urban area, with plenty of hospitals, her likelihood of dying in childbirth is still higher.

If 58.9 percent of maternal deaths are preventable, there are lots of things we can intervene to prevent, right? Well, not until we start addressing followup care. Recently, the American College of Cardiology published a study showing that women who suffered preeclampsia were more likely to experience cardiovascular problems in the five years following childbirth. Further, the study found that women don’t receive the necessary follow-ups to monitor their condition after the baby is born.

The CDC study also found that most pregnant women don’t know the symptoms for hemorrhage, cardiomyopathy, preeclampsia and eclampsia, infection, or mental-health conditions — so when a woman “just doesn’t feel right,” she doesn’t know how to self-diagnose to a doctor or nurse, and, really, why should she? And if she doesn't feel empowered to advocate for herself, red flags can go untreated. In fairness to the healthcare providers on the front lines, while a woman is under medical care, she can be monitored, and nurses in particular are diligent about monitoring their patients, and experience the chief burden of patient care. But once a mother is discharged, she is beyond the reach of medical staff unless there is a plan in place for follow-ups and monitoring — which there usually isn’t, outside the six-week checkup.

The startling lack of preventative care is a problem in and of itself. As the American Pediatric Academy notes, screened women in the Netherlands were found to have a 60 percent lower incidence of major depression than unscreened counterparts. Screening all pregnant women for postpartum depression makes a sizable difference. Why doesn’t the U.S. do this? Simply educating new mothers and non-psychologist doctors about the signs and symptoms of PPD and PPP can minimize these deaths and make most of them preventable with proper care and education.

You can’t address the health of a baby without addressing the health of the mother, and vice versa. It’s interesting that the single-most effective intervention for infant survival so far has been a behavioral change implemented by the parent — putting your baby on its back to sleep. Perhaps the reason that the U.S. is so wildly out of whack with other countries when it comes to both infant and maternal health is that the bigger questions — of healthcare access, racial disparities in treatment, and social support systems — have not had the same level of attention devoted to them.

Consider, if a baby is to die at a daycare, the center is likely to be closed. But when a mother dies during or after childbirth, the details are often lost to the self-preserving hospital system, which is in the first place premised on what insurers allow them to cover. That is where we get the magical two-day maternity stay (far shorter than the four-day stay we see in Europe), and a complete lack of nationwide paid maternity leave — another way the U.S. is at the bottom of the list of countries, and in this case, almost every country on earth. How can we be so focused on saving infants and have such disregard for their mothers?

At a panel on maternal mortality, Dr. Carroll, a professor of pediatrics noted that system-wide healthcare issues impact maternal health. “Proper maternal care helps to prevent morbidity and mortality, but that care is difficult when clinics close and insurance lapses,” he said, as reported by the Journal of American Medical Association. He went on, “we’ve spent the last few years — if not more — focused on efforts to reduce infant mortality. Mothers may need a similar commitment.”

It starts with listening to women who report pain, or discomfort, or should perhaps stay in the hospital longer than the two-night stay offered by their insurance. It extends to providing home support in those early weeks, and screening them for depression, and providing education, resources, supplies, and care for the mother as well as the baby.

We are evangelical about the Baby Box. So if there were a New-Mom Box, what would it have in it?

Ideally, there would be fridge magnet with a hotline for new mothers and fathers. And a magnet that says, "You're not imagining it, this is really hard!" There would be information about the signs and symptoms of PPD, infection (internal/abdominal and breast/nipple for breastfeeding mothers), heart problems, preeclampsia, and bleeding for the mother. There would be sanitary pads. A checklist of warning signs for the top causes of death or medical complications postpartum, with instructions that if you have any, you should call your doctor. A soft nursing bra. Links and phone numbers to nationally recognized, reliable sources of medical information and groups like Every Mother Counts, USLCA, Mayo Clinic, ACOG, and Postpartum Support International. Luna Bars. Topical spray. La Croix. And information on local support groups for mothers and babies at the local hospital or clinic or library or scout hall.

By now you, like me, understand the limitations of what you can put in a box. Helping improve maternal outcomes in the U.S. cannot happen without doctors, insurers, and caregivers boosting the level of support women are receiving. New moms need home visits, lactation support, someone to talk to, meals. And yes, standardized procedures in hospitals for obstetric emergencies. But also racial awareness training for hospital staff. Nutrition support through pregnancy. Facilitated support groups.

Because the missing link is attention. If you want to improve infant outcomes, you cannot do it without, at last, caring for the mother.