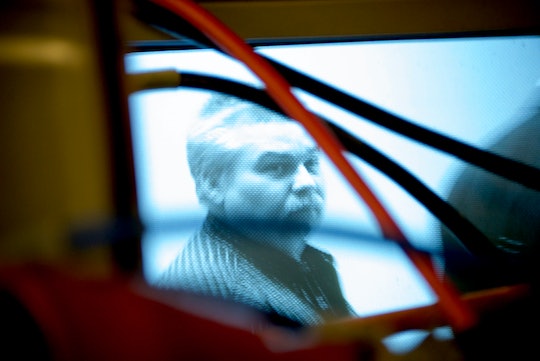 There are very few people who haven’t seen Making A Murderer at this point. The Netflix series has people asking whether Steven Avery and Brendan Dassey were guilty for the 2005 murder of Teresa Halbach. But it has also led some of those closest to the case to recount all of the cases' details and take sides — either in support of the Manitowoc County Sheriff Department's narrative or against it. One of those people is former news reporter Aaron Keller, the hot, grey-hair reporter from Making a Murderer, who told Us Weekly he still has questions about the Avery case that weigh on him to this day.

Though Keller, who many fans refer to as the silver fox reporter from the series, told Rolling Stone that he has yet to watch documentary series in full, he said other reporters who have watched it said “that it doesn't paint the definitive media history of the case” but that he believes that wasn’t the filmmakers’ goal anyway. He also told the magazine that a competing news station reported that Avery was the last person to see the photographer alive. Why is this important? Some fans said that authorities asserted this as fact, so the news station's report would support authorities' hypothesis. However, Keller also said that the station's report may have just been conjecture at best. “I don't know if it's worth anything. To some conspiracy theorist it might be,” Keller said, according to Rolling Stone:

Channel 2 in Green Bay was the legacy station that had primarily been number one through most of its existence, and to this day, they are pretty tight with the law-enforcement community. We [employees of the NBC affiliate] were mostly outsiders. They were insiders [...] So there were some elements of stories that the NBC station was not able to break because we didn't have entrenched friendships.

But the former Green Bay reporter and current New Hampshire university professor had plenty of questions that went unanswered even though he sat through the grueling trial. “I'm trying to remember whether there was a really bad thunderstorm within those first couple of days when she was reported missing, and when they were looking for her, because my memory seems to indicate that there might have been,” he told Rolling Stone. The reason why Keller was curious about the weather is because he is (and many fans are) curious if Avery’s fingerprints would have been washed off of the Halbach’s car (Rolling Stone determined there was a storm two days after Halbach went missing and on Nov. 12, 2005 — a day after Avery was arrested).

For conspiracy theorists who feel that authorities might have planted evidence, the possibility of a storm is huge. According to Us Weekly, cops found Avery’s "sweat DNA” under the car hood. However, some fans believe that piece of evidence was planted by the Manitowoc County Sheriff's Department.

Obviously that’s false. You get that feeling from the movie that there’s a corrupt Sheriff's office up in Manitowoc County, which is the wrong way to paint the case in the movie. There’s a lot of evidence in this case that the film or movie does not show. I could go on and on about specific pieces of evidence that weren’t depicted in the film. The film basically took the script that the defense used in Steven Avery’s case. Avery had a good defense team, but the jury didn’t buy it, and Avery was convicted of this horrific crime.

It looks to me — because I ended up watching this documentary — that it was produced for entertainment purposes. From the beginning, in episode one, Avery talks about [the incident with] that cat. ... He says he waved it over the fire and it was the family cat and 'I did some stupid things when i was young.' But he was 20 years old, and he didn’t just wave it over the fire — he doused it in gas and oil, and you learn that in episode one. You have this film that shows three or four hours of the courtroom [proceedings] — and I understand when you make a movie you can’t put it all in there — but the jury saw nearly six weeks of testimony and a lot of that evidence was left out of the documentary.

Regardless of fans' thoughts about the entire ordeal, it seems like the more people who watch Making a Murderer, the more questions loom about what really happened.