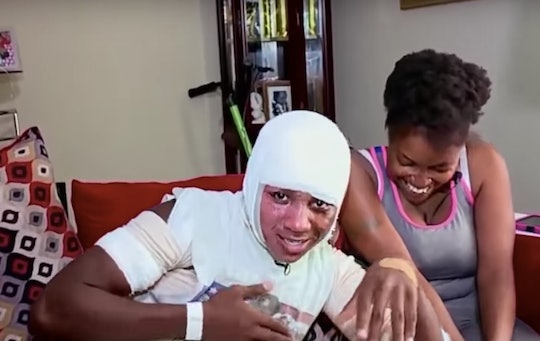 Social media has changed the way we live, work and interact with one another, for better and for worse. As parents, it's incredibly stressful figuring out how to navigate the uncertain waters of teens and the degree of freedom they're given when it comes to internet access. Though it's undoubtedly important for young people to be active and informed, particularly in the digital age, there are always risks involved, and lately, they've been coming in the form of some viral trends. The "hot water challenge" is the dangerous social media craze that's already left teens seriously injured, and this is everything you need to know about it.

Dearly reported that a 15-year-old Indiana teen named Kyland Clark is suffering severe burns all over his face and head after his friend dumped a bowl of boiling hot water on him while he was sleeping. The act, which was part of aformentioned challenge, can also involve trying to drink boiling water through a straw. Clark reportedly told Fox 59: “When I came to my senses, the water got hot and I just got up and ripped my shirt off. I looked down at my chest and my skin just fell off my chest and then I went and looked in a mirror and I had skin falling off right here and on my face."

In August of last year, HuffPost reported that an 8-year-old girl died after attempting to drink boiling water as part of a dare. Though it was not explicitly part of the Hot Water Challenge, the acts were similar enough to convey a strong message: this is super dangerous. Forbes reported that touching or otherwise consuming boiling water can be extremely dangerous, if not lethal. Bruce Y. Lee explained for the magazine exactly why that is:

The risk and speed of injury increases as the temperature of the water increases. Avoid touching any water that is hotter than 120º Fahrenheit, which can cause a third degree burn after only 5 minutes of contact. While the exact timing may vary from person to person, contact with 155º F water can cause a third degree burn in just 1 second, 140º F in 3 seconds, and 130º in about 10 seconds. If you want to take a bath, keep the water much cooler, below 100º F. A bath with hotter water becomes less a bath and more a soup with you as an ingredient.

Though it shouldn't need more explaining, given the popularity of the trend, Women's Health reached out to Dr. Reed Caldwell, an assistant professor at the Ronald O. Perelman Department of Emergency Medicine at NYU Langone Health, to explain what happens when you get a serious burn.

"Third-degree burns are when the skin is either very pale and thick-looking, or actually has muscle, fat, or bone showing," Caldwell told the magazine. He also explained that if you are burned, you want to remove the source of the heat immediately, and find an emergency room where you can be treated with "topical antibiotics and sterile bandages to prevent infection."

Last year, Fox 5 reported that an 11-year-old girl named Jamoneisha Merritt was burned when her friend poured boiling water on her during a sleepover, as part of the challenge. Merritt explained that she was woken up to the feeling of hot water being poured on her. "I was just screaming and yelling," she told the news channel. Merritt then spent a week and a half in the hospital recovering.

As alarming as it sounds, this is just the latest in ongoing social media trends that have young people attempting dangerous feats, like the Tide Pod challenge, for example. It's an important time for parents to make the distinction between what is a harmless prank and what is a serious action with potentially fatal consequences. As always, we must remain vigilant about what children are consuming, and how they are learning right from wrong.