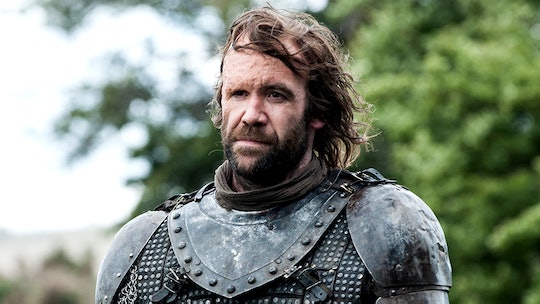 Now that we know The Hound is alive on Game of Thrones, we can rest easy knowing that he likely has nowhere else to go except to King's Landing to be The Faith's champion. As Septon Meribald told Sandor Clegane, the guy was almost dead before he woke up, all but buried and gone. So if that doesn't make Sandor a heavy believer in The Faith in general, then nothing will. Now that we know who "The Broken Man" is from the title of Sunday's episode of Game of Thrones, there is going to be far more for Sandor Clegane to do than cut logs and build houses.

With all of the excitement surrounding Jon Snow coming back to life (which was still, in a word, amazing), now is the time to recognize that Sandor Clegane, The Hound himself, is also back from the dead, in a manner of speaking. So where does this leave his fate? While Cleganebowl seems like the next big fight of his life, there is the possibility that he will first meet with Brienne of Tarth and Podrick as they pass through the Riverlands and meet with Septon Meribald.

In the books, Meribald meets with the two travelers and ends up leading them through the Riverlands and to a meeting with a character known as the Gravedigger, who many fans believe to be just another name (because he needs more than two, apparently) for Sandor Clegane. As we all know, that isn't going to happen in the show, since Meribald, along with all of his brothers, was slaughtered by those awful riders who threatened them.

Basically, the fact that The Hound is alive means that the most important thing he can do for fans now is participate in Cleganebowl and get rid of The Mountain. And, you know, freaking Cersei Lannister.