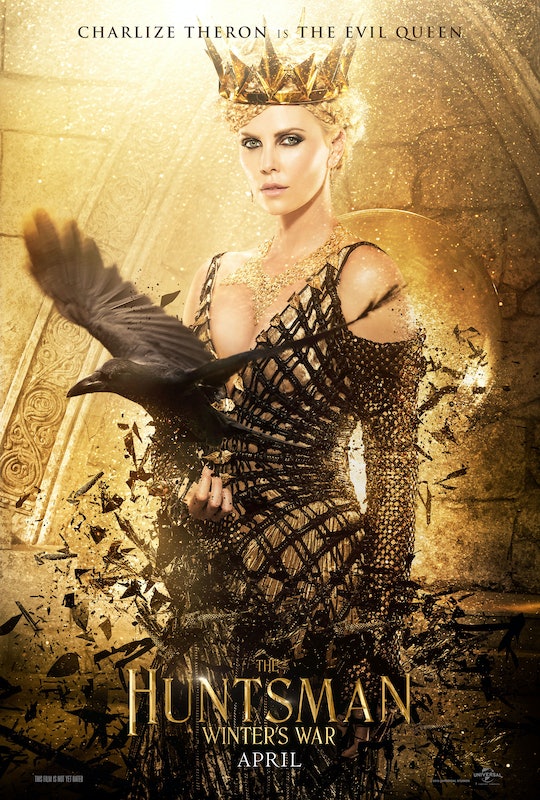 'The Huntsman' Trailer Is Out, & So Far, It Looks Pretty Epic

After the box office success of 2012's Snow White and the Huntsman, the cast has returned for a sequel — this time, sans Snow White (aka Kristen Stewart). If you missed out on the first film, the only thing you really have to know about the second is that these "fairy tales" are not for kids. They're like Frozen on acid, which, trust me, is terrifying (but also kind of awesome). And now, we get our first sneak peek: The Huntsman: Winter's War trailer was just released, and the drama is intense.

The basic plot, as far as I can tell, is that it begins after Snow White thinks she's killed the evil Queen Ravenna, played by the goddess Charlize Theron. Nobody kills off Charlize in my book. Nobody. Queen Ravenna's sister, the Ice Queen, is played by the incredible Emily Blunt, and soon finds a way to revive her evil sister using that pesky Magic Mirror. Their enchanted kingdom has not one, but two evil queens, and the Huntsmen and his uppity army are in for it. I mean, at one point in the trailer, Blunt even says: "Men have forgotten what it means to be afraid." (Ooo, you tell 'em, Ravenna!) She also rides a polar bear and shoots snow out of her eyes.

The subplot, just like the first film, appears to bring on the romance: The Huntsman had been trained by the Ice Queen to be a fighting machine, and the only stipulation was that he could never fall in love. Seems harsh, but I get it. He has shoulder-length hair and wears vests, so it's not surprising when he falls for one of his fellow warriors, who, notably, is a complete badass. (There are also some pretty steamy embraces you can catch a glimpse of in the trailer.) Anyway, I won't spoil the rest. Watch for yourself:

A note to Universal Pictures, though. At least one person on Twitter has some title change ideas for you:

One of the many things about this movie that's hat it's basically two sisters who set out to destroy everything that annoys them (I'm already identifying). Do we really want the Huntsman, aka the male patriarchy, to win here? Eh, not really. Will we enjoy seeing these witches wreak havoc on their kingdom of weak mortals before their inevitable, disappointing defeat? Oh, most definitely. Get it, Charlize.