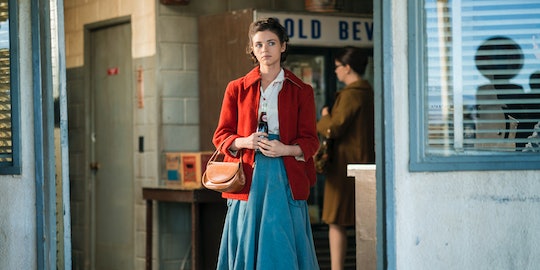 When Fauna Hodel decides to search for her birth family on TNT's upcoming series I Am the Night, she could never have predicted that it would lead her to one of the most famous unsolved murders in American history. The I Am the Night true story blends fact with fiction to explore one terrifying theory about the Black Dahlia murder. Told through the eyes of someone investigating her own family and discovering the darkness that lies within, the show is a different take on a well-known crime.

Black Dahlia was a nickname given to 22-year-old Elizabeth Short after she was found dead in a vacant lot in Leimert Park, Los Angeles on Jan. 15, 1947. Her nude body was bisected at the torso and posed, with her mouth cut at the corners to exaggerate a gruesome smile. She had been drained of blood, according to The Daily Beast, and the surgical precision of her wounds hinted at a murderer with medical credentials. The name "Black Dahlia" was coined by the press, though the origin of that epithet is unclear. Short's killer was never found.

It's a horrifying case that has intrigued true crime aficionados for years, but what does it have to do with Fauna Hodel? I Am the Night will reveal that potential connection when it premieres on TNT on Jan. 28.

But the true events that inspired the show can elucidate things for the audience ahead of time. I Am the Night does fictionalize the story that it's based on, but many of the key figures were real people. Fauna Hodel told her story in the memoir One Day She'll Darken: The Mysterious Beginnings of Fauna Hodel, which provided the inspiration for the TNT series.

There was a lot Hodel didn't know about her birth family, which was what made her decide to search for them in the first place. She was raised by her adoptive mother Jimmie Lee in Nevada and grew up believing she was mixed race. She learned that she was the child of Tamar Hodel, who had given birth to Fauna when she was just a teenager. Tamar was the daughter of Los Angeles gynecologist Dr. George Hodel — who was one of the chief suspects in the Black Dahlia murder.

Dr. Hodel's connection to the crime was never definitely proven, though it wasn't the only nefarious situation he found himself associated with. He had come under suspicion in the 1947 death of his secretary, according to the L.A. Times. Tamar had also accused him of raping her when she was 14 years old.

He was so high up on the LAPD's suspect list that they bugged his home, which was when they caught an especially incriminating statement. As reported by Cosmopolitan, Dr. Hodel allegedly said: "Supposin' I did kill the Black Dahlia. They can't prove it now. They can't talk to my secretary anymore because she's dead."

There was never enough evidence to apprehend Hodel for any of his possible crimes and he eventually relocated to the Philippines. Fauna's discovery of her heritage and its subsequent impact on her life serves as the basis for I Am the Night. The series may take some artistic liberties, but this is one instance where the truth is even stranger than fiction.