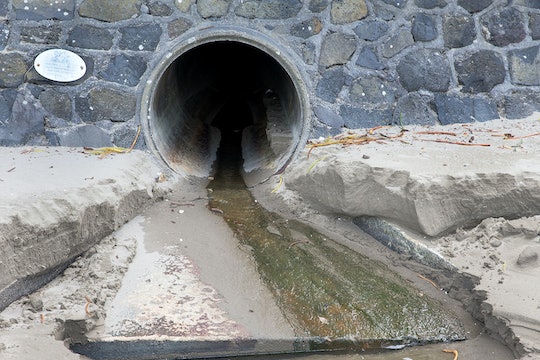 Growing up in New York City, you hear horror stories about the sewer system. Swimming underneath the concrete streets are tons of trash, vicious alligators, and now-giant goldfishes that were once a child's beloved pet. Turns out, one of those three things is actually destroying the U.S. sewer system. To solve the problem, Washington, D.C. is trying to ban wet wipes, a parenting staple, but for a good reason.

Chances are, you or someone you know uses wet wipes in place of toilet paper. It's understandable, after all; wet wipes are soft and pick up a lot more dirt, if you will, than a few squares of that dry paper stuff. But pre-moistened wet wipes are also hurting sewers around the world, according to The Atlantic. Wipes flushed down the toilet help create fatbergs (pause for a laugh), massive lumps of fat, sanitary products, wet wipes, and other similar products found in the sewer system that cannot disintegrate or are not biodegradable.

Fatbergs can clog a city's pipes and cause sewage overflows. To curb the issue, D.C. lawmakers have passed a measure banning wipes that are non-flushable and are ultimately damaging, according to Roll Call. The law takes effect next year.

Congress, though, wants to put a halt to the effort. Roll Call reported that Republican House Rep. Andy Harris of Maryland has threatened to overturn the local wet-wipe measure by adding language to a federal spending bill. At the same time, Roll Call noted, that same 2018 spending bill doesn't include any money for the D.C. Water and Sewer Authority, even though the agency received $14 million in funding for the 2017 fiscal year.

Of course, D.C. lawmakers are having none of Congress' nonsense. They're warning Congress members to stay out of local political affairs, especially if they're not actually helping the fatberg situation. D.C. Democratic Delegate Eleanor Holmes Norton even suggested sending photos of the sewer beasts to Congress members, according to Roll Call.

Wet wipes may seem like a ridiculous thing to regulate, but fatbergs are a real problem. According to the National Geographic, fatbergs have broken the sewer system in London. One of the London fatbergs that National Geographic came across was a 15-ton mound "about the size of a school bus," which was considered "the biggest berg in British history."

As a mom, wet wipes are heaven sent. But I understand how damaging they can be. Banning non-flushable, non-biodegradable wipes is one way cities can help make the environment a better place for the kids we're raising.