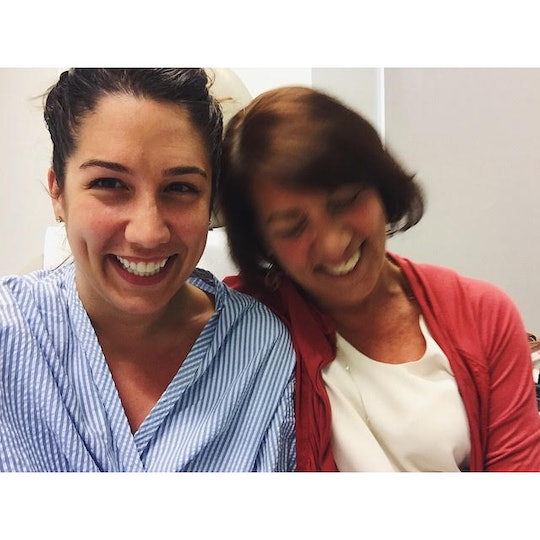 Why I'm Freezing My Eggs In My 20s

I’m cuddling with my hot water bottle and dozing off next to a bottle of Extra Strength Tylenol, while recovering from my second egg retrieval. Even though I’m not infertile, due to a genetic mutation I might need to part with my ovaries before I’m ready to have children, so I've decided to freeze my eggs.

Two years ago, after a quick blood test at my gynecologist’s office, I tested positive for the BRCA1 genetic mutation, which increases my likelihood of developing breast, ovarian, and pancreatic cancers. This information was dumped on me swiftly and without fanfare. I was 27.

At that point, I hadn’t given much thought to becoming pregnant, aside from actively avoiding it. I was just focused on paying rent in my Brooklyn apartment and making eye contact with a cute guy at the bar. But after I learned that I had the BRCA1 genetic mutation, I realized that I had to move quickly. So after having a preventive double mastectomy to reduce my risk of developing breast cancer, I decided to meet with surgeons and oncologists to learn more about how I could preserve my fertility.

One of these specialists drew a chart of my ovarian cancer risk, which will increase to 63% as I age, and recommended I remove my ovaries by the time I was 35. I put the pieces together: no ovaries meant no kids. For the first time in my life, I began thinking about pregnancy, and if I even wanted to have children to begin with. I couldn't pay my credit card bill on time, let alone even dream about getting pregnant. But was I ready to close the door on that part of my life?

Eventually, I decided to make an appointment for a consultation with a fertility specialist to learn more about freezing my eggs. So I booked a consultation at the Center for Reproductive Medicine at Weill-Cornell. The waiting room was filled with well-off couples, barely concealed expressions of anxiety washing over their perfectly manicured features. I realized I was the only person there without a husband or wife, boyfriend or girlfriend, or a partner of any kind.

What no one tells you about this process is just how physically exhausting it is.

After meeting with the doctor, we quickly decided that freezing my eggs was the best route at the time, as my eggs were likely to be young and healthy. The following week, I began the tedious process of preparing my ovaries to produce a bounty of eggs.

When you begin fertility treatments, your life is suddenly on an extremely regimented schedule that begins at 6:30 am with a blood draw and ends around 10:30 pm with more needles poking into your abdomen and filling you up with fertility drugs, which stimulate the ovaries and cause your eggs to ripen.

For two weeks, I dutifully showed up to get my blood draws and shots. I'd endure the endless sticking and poking, my arms and abdomen looking like I had just gotten into a bizarrely targeted fight. What no one tells you about this process is just how physically exhausting it is: because my body was flooded with hormones, I was prepared to feel emotionally drained, but I didn't realize that the drugs would cause me to bloat and ache for weeks.

We knew we were there for one reason and one reason alone: we all wanted children, and we needed help in making that happen.

Then the extraction process began. As soon as I entered the operating room, I'd be hooked up to an IV, which would be flushed with warm, sleepy syrup. While I was asleep, my doctor inserted a needle through my vagina into my ovaries to extract the eggs. A quick 20 minutes later, I'd blink my eyes open in recovery, where a nurse offered me juice, crackers, and pain killers.

Having already undergone a preventative double mastectomy and two reconstruction surgeries, I was already a seasoned OR patient. So the daily routine came easy: no food after midnight, arrive at 7 a.m. only to wait until 10 a.m. to be admitted, remove all jewelry and comfortable clothes in exchange for paper thin gowns and pants.

I sat in the waiting room, seeing the same women over and over again. We never spoke, but we silently shared sympathetic gazes, accompanied by weak smiles and expressions of fear and exhaustion. We knew we were there for one reason and one reason alone: we all wanted children, and we needed help in making that happen.

My first retrieval left me feeling optimistic. My doctor told me he had retrieved 18 of my eggs, and 12 of them were viable for freezing. (The average is between 5 to 12 per cycle, depending on a woman's age.) But on the second go-around, my doctor was determined to get more eggs, so he pumped me with more hormones, which led to me experiencing extreme mood swings. At my apartment, I cried as I performed regular spring cleaning, not wanting to part with heartfelt notes and cards I would’ve discarded on a normal day.

I can see the faces of all the other tough women in the waiting room who are on their first, third, or even sixth rounds of shots and ultrasounds and retrievals, desperately trying to preserve their ability — their right — to be a parent. I realize I have all these other women on my side, even if they don’t know it.

Though the hormones had a powerful effect on my body and mind — I gained nearly ten pounds in two weeks, and no mascara was a match for my steady stream of tears — the retrieval was not as successful as the first one. Despite being carefully monitored for weeks, the follicles in my ovaries had ruptured, leaving my abdomen full of bloody fluid and a mere nine eggs, of which only seven were able to be frozen. My doctor explained this was the product of overstimulation, meaning my follicles had grown too much, too quickly.

The next day, I woke up to find my inner thighs stained with dry blood. To be blunt, it was like the prom scene from Carrie. I started sobbing. I had gamely tolerated the arduous egg-freezing process for weeks, but despite all the needles and bruising, it ended up doing more harm than good to my swollen, 29-year old body. I'd gotten nine eggs, which wasn't nothing, but I feared that the eggs would share my genetic mutation, making the process of freezing my eggs seem totally hopeless.

A few hours ago, I told my mom and dad, who have supported me throughout this whole process, that I would never do this again. After all, at the moment I'm not even sure if or when I want kids, or who I would even have kids with. I'm doubting my ability to continue this process, or even whether it's worthwhile.

But as the pain fades, I can see the faces of all the other tough women in the waiting room who are on their first, third, or even sixth rounds of shots and ultrasounds and retrievals, desperately trying to preserve their ability — their right — to be a parent. I realize I have all these other women on my side, even if they don’t know it. So I know that I can do this again.

Since learning about my mutation, it’s felt like so many other options have been taken away from me. So I want to preserve my fertility options now, while I still have the chance. Now I'm back to the beginning, with my hot water bottle and a hearty plate of pasta, because after all I've been through, I deserve it.