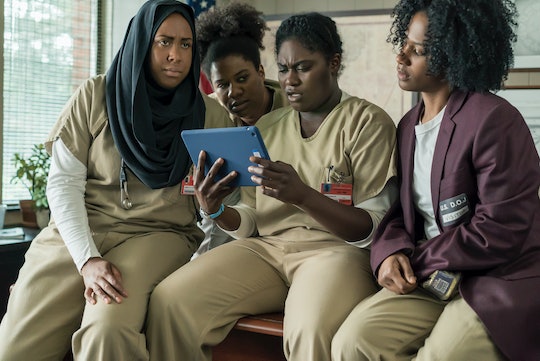 Warning: Episode 3 spoilers ahead! The riot that is central to Season 5 of Orange is the New Black was a chance for the inmates to vent their anger, but also allowed them to make demands to improve their conditions. Though the riot broke out spontaneously in a moment of high tension (and resulted in some pretty serious consequences), the inmates ultimately decided to present a unified front so they could actually get something out of the situation. And the inmate demands on Orange is the New Black address real-life prison concerns.

All they really wanted was to be treated like human beings and not animals. The bulk of Season 4 was spent watching untrained and arrogant guards take advantage of the women of Litchfield to a horrifying degree, subjecting them to assault, harassment, and rape. At the same time, the buyout by private company MCC resulted in prison overcrowding and even worse living conditions. Pressure had been building at the prison for a while, and in Season 5 it finally exploded.

Though there were some humorous suggestions from the inmates when it came to demands (an anti-gravity chamber; the availability of flaming hot Cheetos; an ice cream sundae bar), the majority of the demands were simple pleas to be treated humanely.

Their top 10 demands, voted on by many of the inmates, were mostly things they should have already had access to, like better healthcare and regular doctor visits, as well as more work opportunities, fair wage, and equal treatment regardless of race or status. They wanted nutritious food and free tampons, plus access to education by reinstating the GED program.

But in addition to extremely basic care, they also wanted the abuse to end. They wanted the sadistic guards fired and replaced with people who actually knew how to do their jobs, as well as an end to degrading cavity searches and solitary confinement. They also wanted the man who killed Poussey, C.O. Bayley, to be held responsible.

All of these things reflect very real concerns in real prisons. Women's Prison Association director Georgia Lerner told The Guardian, "Prisons were designed to confine people and keep them alive, and not much else. We lock people up, strip them of all authority over themselves, disempower them in a very real way — and then expect them to be able to function in the community after they are released. It simply doesn't work."

Rehabilitation is made difficult by the lack of assistance provided to inmates and the often deplorable conditions they live in. According to The New Yorker, even the Riverhead correctional facility (where OITNB has filmed some scenes) faced more than 90 complaints filed by inmates in the past, regarding their living conditions. Meanwhile, The New York Times has reported that menstrual pads and tampons can be denied to female inmates as a tool of control, despite the necessity of them.

Orange is the New Black definitely exaggerates some aspects of prison life as television is wont to do, but the show is honest when it comes to the ordeals female inmates have had to go through in the past. But hopefully since the show brings such important issues the forefront, it won't be something they'll have to endure in the future.