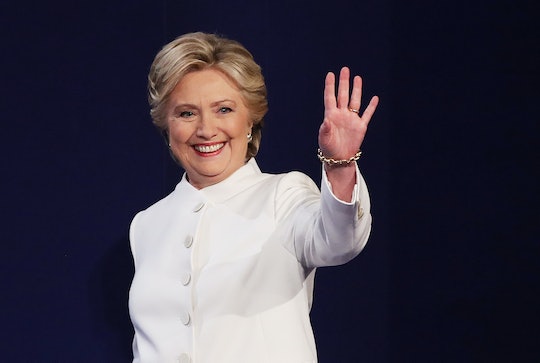 When Democratic presidential nominee Hillary Clinton took the debate stage one final time in Las Vegas on Wednesday night, she was wearing an all-white, button-up pantsuit. While the suit received plenty of comments on social media, it wasn't just a snazzy outfit. Clinton wore white for a very interesting reason: She was likely paying homage to suffragettes who dressed in white while fighting for the right to vote.

As the first female presidential candidate from a large political party, Clinton is definitely breaking ground for girls across the United States. According to ThinkProgress, that's a probable reason for Clinton's white-wearing ways during this election campaign. According to The New York Times, white was one of the official colors of the National Woman's Party when it marched for the right to vote. "White, the emblem of purity," read a mission statement from the National Woman's Party, "symbolizes the quality of our purpose."

When she was formally nominated as the Democratic party's candidate in July at the Democratic National Convention, Clinton wore white as well, and it did not go unnoticed — partly because this isn't the first DNC throwback to the suffrage movement. When Geraldine Ferraro became the first female vice-presidential candidate in 1984, she also dressed in white while accepting the role.

So, while Clinton may look extra sharp in her all-white outfit, there's more to the story than just good design. By wearing white, Clinton is giving both Ferraro and the suffragettes a little hat tip and encouraging women across the world to keep pushing for more.

Valerie Steele, director of the Museum at New York's Fashion Institute of Technology, definitely noticed Clinton's outfit choice. As she told The Guardian in July:

This was a way of using clothing to speak through a visual message. Because it’s not something a lot of people know [that suffragettes wore white], but once people are aware of that, it does reinforce the historical importance of Hillary hopefully becoming the first women president.

Not to mention that the white suit looks pretty stunning, as well. "In everyday life, we don’t dress all in white for practical reasons," Steele told The Guardian. "To dress all in a white makes an impact."

You know what else makes an impact? Being the very first female to make it to a final presidential debate. And I have a feeling that if Clinton clinches the presidency, she'll wear white on her very first day in the Oval Office — which, okay, she probably spent some time in as Secretary of State, but you know what I mean.