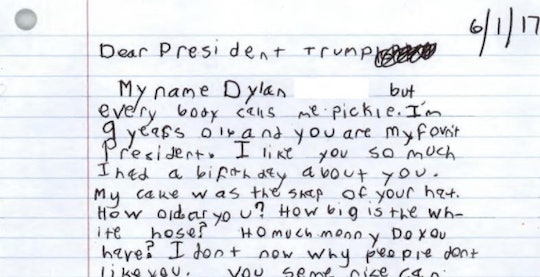 Under President Donald Trump's administration, White House press briefings have been, well, different than what Americans were used to. Now that Sean Spicer has been replaced by Sarah Huckabee Sanders, don't expect things to go back to normal. On Wednesday, the new Press Secretary read a piece of fan mail allegedly written by a 9-year-old named Dylan, AKA "Pickle," and the internet is convinced that this little boy's letter to Trump is fake.

Sanders began the briefing not by addressing the series of anti-transgender tweets her boss sent that morning, but by handing Secretary of Education Betsy DeVos a check from Trump for $100,000, as if the White House were a game show, and she won the grand prize by being the first member of his cabinet to implement a transphobic policy. After some brief remarks from DeVos, Sanders returned to her lectern to remind the press that she was a working mom before introducing a fun new policy: "every once in a while," Sanders said, she'd begin briefings by sharing a letter from "some of the forgotten men, women, and children that we're here to serve and that the President is fighting for." She then read, and responded to, what she claimed was a genuine piece of mail received by the White House.

One reporter asked for a copy of the letter, and Sanders said she'd provide one after removing "Dylan's" last name. She read his full name during the on-camera briefing, which was broadcast live, recorded, and transcribed by the White House, so it's unclear why his name was later redacted. But the evidence she provided wasn't enough for some skeptics, who liken the letter to Vladimir Putin's bridal gown-clad groupies, or the claim that Kim Jong Il could control the weather.

Many Twitter users seized on some characteristics in the image that actually make the whole story less plausible.

Others thought that his name sounded strangely made-up. Hasn't Trump learned anything from the "John Barron" debacle?

And can we talk about this birthday party for a moment?

Also, I would really love to see photos of that cake. Any chance his parents posted it on Pinterest?

The comment about people not liking Trump had a few people scratching their heads, as well. First of all, why remind your idol that he's not universally adored? Second, you'd think his parents would have told him it's because those liberal feminazi ISIS-loving elitists want to take everyone's guns and cancel Christmas.

But best of all, some people found more letters!

If there really is a 9-year-old Trump superfan out there somewhere, here's hoping he makes an appearance on Good Morning America soon, because people have a lot of questions for him.