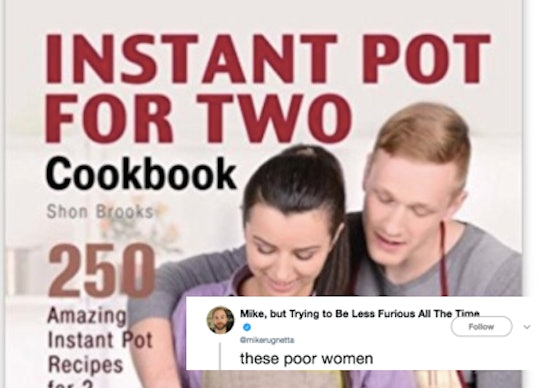 Instant Pot cookbooks all feature different iterations of the same photo: a man hovering over a woman, teaching her how to whip up a meal with their pressure cooker. And, after an eagle-eyed Twitter user called out the creepy photos, the internet has been losing it. In true 2018 style, the sort of ridiculous images quickly went viral and the original Twitter thread is now as rife with disconcerted GIFs as the world is still evidently rife with sexism.

The New York Times has written about the Instant Pot as "The Kitchen Gadget That Spawned a Religion," and HuffPost reported that the device's most avid users have "branded themselves as 'Potheads.'" But I wonder if these potheads use it in the same way the cookbook's cover photos depict straight couples using it. I can't imagine that they do...

The Twitter user who first shared the photos of the cookbooks is Mike Rugnetta, who makes popular podcasts and web shows, according to the Daily Mail. He posted a few photos tweeting no words beyond, "these poor women." There's no real explanation necessary either, because pictures really do speak a thousand words. For example, one of the covers features a man helping a woman cut a pepper... the wrong way, no less. It's just your classic example of mansplaining, really, but there's a knife involved. Instant Pot didn't immediately respond to Romper's request for comment regarding jokes that the cookbook covers are subtly sexist.

It's like the men in the photos are saying, "Anything society says you should do as a woman, I can do better." Except they're not even doing it right... And who wants someone breathing down their neck when they're trying to cook?

Rugnetta later followed up his original tweet by commenting on the thread, "WHY ARE THERE SO MANY OF THESE" with Even. More. Creepy couple photos. And again by tweeting, "Today I Learned an instantpot is actually a bell pepper transmogrifier." Naturally, others followed suit by sharing their own two cents about the Instant Pot's functionality and the uselessness of each of the men's hand placement in the photos.

One of the commenters also pointed out that the Instant Pot can supposedly cook a bajillion different recipes, but in most of the images couples are cutting bell peppers. Another even asked what the Instant Pot could possibly make out of what appeared to be a setup for cucumber sandwiches...

"I'm more wondering the odds and possible statistics of a left handed couple," another questioned, referring to the couple shown cutting a cucumber together with left hands. "Or maybe he's just left handed and that's why she looks a little worried."

Most commenters, however, threw some new slang out there, such as mancutting ("It’s mansplaining but with knives and produce," one tweeter explained), manslicing, knifesplaining, backseat cooking, and deMANstrating. One person said that deMANstrating, however, sounds like "a weird slang for castration with the de-man and the strating." Another retorted, "I'm pretty sure that's what those ladies are planning."

Ay de mi. For all the crap given to the internet for turning people into social media-crazed avatars, I have to say that, without Twitter, we'd be all be as hapless as the women working these Instant Pots. In times of need, Twitter rubs our shoulders and puts its hand over our hands to tell us: You look like you could use help with that.