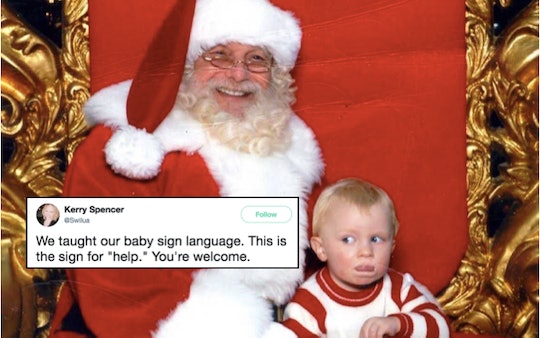 While not every family may choose to tell their kid about Santa, those who do all tend to look forward to one Christmas tradition in particular. That's right, going to the mall and sitting on Santa's lap to pose for a picture. And now, this viral photo of a toddler signing for "help" with Santa is making the rounds once again because it's seriously adorable and oh so hilarious.

The photo in question features Samuel Spencer, who is now 13 years old, sitting next to Santa Claus and posing for a photo, according to local CBS News affiliate WUSA 9. While young Spencer isn't exactly making a super expressive face like some children tend to do while seeing Santa, it's his hand gesture that has everyone talking. "We taught our baby sign language. This is the sign for 'help.' You're welcome," Spencer's mother tweeted.

Clearly, her friend had the right idea, as Spencer's tweet has since garnered over 24,000 likes and over 6,000 retweets since it was posted last week.

It's only been five days since Spencer tweeted the photo of little Samuel subtly signaling to his parents that he wanted "help" while sitting next to Santa with some serious side-eye, so there's actually a lot of time for the photo to gain even more traction. And honestly, why wouldn't it? The photo has everything you need for an adorable and hilarious moment in time. Cute kid? Check. A Christmas theme? Check. The kid being totally unsure about the old man with the giant beard right next to him? Check.

Of course, some Twitter users were a bit skeptical about the photo and were questioning whether little Samuel was actually signaling for help or was just holding his hands in a funny way.

"Which sign variant is this? BSL and ASL are a bit different (thumb up fist on palm upwards flat hand). I think the left hand might be moving away? Maybe I'm overthinking this..." one Twitter user asked.

But, Spencer was quick to point out that she had taught her son ASL, and that it was specifically a "baby" version of the language, which means that it might look a little different than what some might expect, but she understands it.

"It's ASL baby sign; like with spoken language certain words are 'mispronounced' by babies learning them," Spencer explained in a tweet. She also posted a photo of the proper way to signal "help" in ASL and said, "In baby sign you go with what they do. We showed him the ASL version and this is what he did."

Aside from any confusion or questions about what he little Samuel was signing, the internet is clearly can't get enough with this viral holiday photo.

Others Were Just Floored By It

Some Were Quick To Critique The Baby's Signing Of "Help"

And, Of Course, There Were Some Shamers In The Crowd

As adorable as the photo itself is, the fact that Spencer taught her baby sign language is also pretty sweet and really smart. According to Chicago Parent, "Teaching your baby sign language, especially a few easy signs, can make all the difference and actually propel their language skills." Little Samuel must be pretty sharp since he was able to catch on to ASL at just 1 year old.

Oh, and Samuel, who is now a 13-year-old kid, doesn't seem to be too embarrassed by the funny photo, as a lot teenagers might be.

So, the moral of the story? Spencer's photo is 12 years old now and it's still making people laugh (and talk). So, no matter what, don't throw out those old family photos.