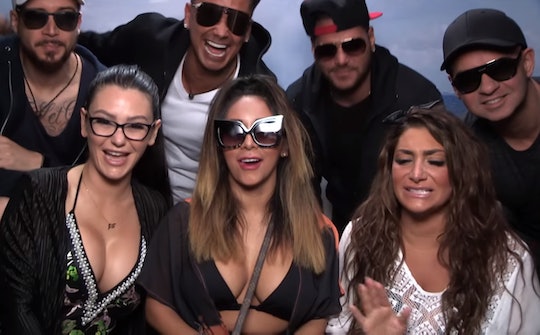 They may have grown older, but that doesn't mean they've grown up. MTV is resurrecting the fist-pumping, spray tan loving gang that introduced terms like Guidette, Meatball, and GTL to the American lexicon, and fans are reacting to the Jersey Shore Family Vacation trailer in a way you'd expect to see from someone perusing an old high school yearbook, or returning to their hometown after decades abroad. On the one hand, those who grew up with the original show — which aired from 2009 to 2012, not that long ago, guys — are feeling hella old. But on the other hand, the fact that this band of 30-somethings can still hang is giving them hope.

Jersey Shore was little more than six seasons of drunken debauchery in a beach house, and the reboot seems to follow the original formula, with a few notable exceptions. It was shot in Miami this time around (Jersey's kinda cold right now), Sammi "Sweetheart" Giancola is absent, and everybody's bringing their spouses and children. Yes, you read that right; the cast has five kids between them, and they're reportedly taking them along for the ride. Will they be partying in front of the kids? Taking turns between babysitting and clubbing? We'll have to wait until April 5 at 8:00 EST to find out.

Sammi is skipping the show this time around in order to avoid her ex, fellow cast member Ronnie Ortiz-Magro, according to E! News. But the rest of the cast will be there, including Nicole "Snooki" Polizzi, Mike "The Situation" Sorrentino, Paul "Pauly D" DelVecchio, Jenni "Jwoww" Farley, the Professor and Mary Ann — sorry, make that Deena Cortese and Vinny Guadagnino, the two with boring names.

Snooki's husband, Jionni Lavalle, chose not to tag along as well, but he squashed divorce rumors in an Instagram post in January: "I am CHOOSING TO NOT be on TV because I simply DO NOT like it," he wrote. "Nicole and I are doing great and became even stronger together while raising our kids."

Fans are eagerly anticipating their chance to see the gang up to their old tricks, even with the bonus babies in tow. You'd think they're all reuniting with old friends, rather than watching a reality show.

If you can't wait until April to start fist-pumping along with the cast, MTV has got you covered; they're airing four Road to Vacation specials featuring "the most unforgettable Jersey Shore footage" and new cast interviews, according to the Viacom blog.

The first special premiered on Thursday night, and they'll continue to air weekly up to the Family Vacation premiere.

Make no mistake, though, this is no "last hurrah" for the crew. Another season has already received the green light, although it will likely be filmed in a different place.

Let's all just promise each other that this nostalgia won't lead to a resurgence of spray tans and overly-gelled hair, because that wasn't a good look for anyone.

There's sure to be some drama, too, as The Situation is currently dealing with legal drama.

In January, he pleaded guilty to tax evasion, according to TMZ, and had to get permission from the judge to travel to Florida for the show.

So, maybe it could be his last hurrah for a while, I suppose, but the rest are still down to party.

Just remember, when you're watching, that these are all teachable moments. Yes, most of the cast eventually pulled it together and found success as adults, but they had those MTV paychecks to fall back on.

Please, for your own sake, don't try this at home.